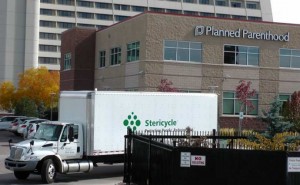 Stericycle, which has a record of hauling aborted fetal waste despite a company policy against doing so, recently reiterated its policy against taking fetal remains and told the group Created Equal that it has “canceled hundreds of contracts with women’s clinics” over the past few years.

Stericycle representatives did not respond to multiple phone calls seeking to officially confirm Created Equal’s claim. But one employee who declined to give his name told me he’d heard about the canceled contracts via internal company communication.

Created Equal director Mark Harrington called Stericycle’s move “a vital first step in the process of ceasing its involvement in the abortion cartel.”

Although the waste company still takes refuse from some Planned Parenthood centers, it requires abortion providers to certify that fetal remains are not mixed in with other garbage and that they have a licensed handler for fetal remains.

Some 400 abortion centers have been unable to do so, and Stericycle no longer picks up their trash.

In 2014, British Columbia Ministry of Health spokeswoman Kristy Anderson said Stericycle took the province’s fetal remains and sent the waste to an Oregon power plant, which allegedly burned them. The power plant later denied it had burned baby body parts, though it previously said it just burned whatever arrived in sealed boxes.

In December 2015, Ohio Attorney General Mike DeWine reported Stericycle at one point was the sole recipient of fetal waste from Planned Parenthood–Northeast Ohio. The fetal remains either ended up in an Ohio landfill after being steam-cooked, or were incinerated.

Created Equal sees fetal tissue disposal as the abortion industry’s “weak link.” If companies like Stericycle don’t collect the waste, abortion centers can run out of room in their freezers. Abortionist Renee Chelian joked in an undercover video taken by Created Equal about sneaking fetal remains into the woods of upper Michigan and burning them: “We are all one incinerator away, or one incineration company away, from being closed.”