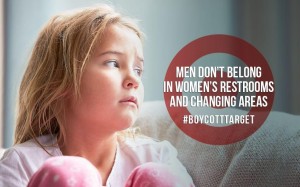 Target Corp. released its fourth-quarter earnings last week, and the news was nothing to write home about.

CNBC reported that Target has been refurbishing stores and adding new home furnishings and apparel brands in the hopes of luring more people to shop there.

But if the report is any indication, the plan isn’t working as well as investors would like.

The Street reported in its story, “Here’s Why Investors Don’t Like Target’s Earnings Report,” how Target “missed on fourth quarter earnings and saw its key gross profit margin come under pressure.” After the announcement, Target shares “plunged 4.3 percent in pre-market trading.”

Hopefully, the somewhat stagnant sales will be a wake-up call to Target executives who refuse to acknowledge that a dangerous, misguided restroom policy is keeping customers away.

Since this terrible policy at Target was announced nearly two years ago, dozens of women and children have been victimized by male predators inside Target stores. The lure of home goods and clothing won’t bring them back. Shoppers can find quality goods at reasonable prices at hundreds of stores that don’t welcome men into facilities for women. Target remains willfully blind to the link between the boycott and financial loss, but this blindness should not persist. Investors will hardly allow a politically correct bathroom policy based on a minority opinion to sink Target’s profits further.

We must keep the pressure on Target. AFA initiated #BoycottTarget on in April 2016, just a day after the bathroom policy was announced on Target’s website. More than 1.5 million people have signed the #BoycottTarget pledge, and Americans can still get on board through the following actions: