Liberty alumni quickly complained about the apparent alliance with Hinn, the subject of widespread criticism from evangelicals: Challies.com on April 23 called him “a dangerous deceiver, a fraud and charlatan who enriches himself at the expense of countless others.” Liberty quickly posted on the school website a series of clarifications about licensing and usage issues, and had its lawyers issue a “cease and desist” request to Hinn’s ministry. 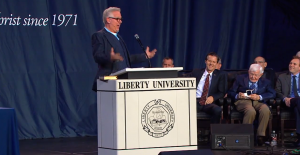 Soon the video, taken down, resided only on YouTube, and Liberty president Jerry Falwell Jr. issued a statement saying Godwin would no longer be involved in special projects, and would “focus solely on Liberty’s academic programs in his role as Provost.” Other statements on Liberty’s site emphasized that “Liberty is not partnering with Benny Hinn.”

But school administrators stirred the waters again with the April 25 appearance of Beck, a Mormon, who spoke of the “atoning work of Christ” in his life but also laced his convocation appearance with Mormon theology—at one point declaring that “nobody in the Grand Council” chose to come to earth from heaven in order to be an accountant or make T-shirts for a living. Beck also announced a $50,000 donation from his charity, Mercury One, to Liberty.

Alumni and other critics have noted that Liberty’s response to the Hinn video fiasco and others was merely to clarify the legal problems with it, and not to distance the university from Hinn’s theology. But David Corry, general counsel and spokesman for Liberty, told me that Liberty “has attempted to focus on the legal issues and not engage publicly on all the other issues that could be debated amongst Christians, as those type disputes tend to be self-destructive.”

Two bloggers, James Duncan and Liberty grad Matthew Grant McDaniel, posted quotations from cult leader Sun Myung Moon that seem to paint Godwin as a disciple of his in the early ’90s, when Godwin worked for Moon’s newspaper, The Washington Times. But Godwin told me he only worked at the Times and with “hundreds of other professionals at the paper. … I was never a member of Moon’s church, nor was I ever a spokesperson for Moon himself. Moon often made claims about various non-church employees at the paper that were totally false.”