Strawberries can reduce the risk of chronic inflammation and disease 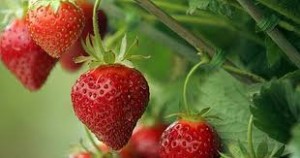 (NaturalHealth365) The dietary flavonoid fisetin found in abundance in strawberries is a potent force for staying healthy. It’s a shame this delicious fruit (and its properties) don’t get more positive press in the lamestream media. (hopefully, this story, will be shared ‘far and wide’)

The new Salk research confirms that getting more of the antioxidant fisetin can bring benefits to memory and osteoarthritis symptoms. In other studies, fisetin has been found to assist with the conditions of mercury exposure, homocysteine clearance, diabetic neuropathy and liver damage.

The Salk group had previously studied the effects of fisetin on mice with a genetic form of Alzheimer’s. However, this only accounts for 1 to 3 percent of all cases. The larger Alzheimer’s risk is a form called sporadic AD, which occurs later in life.

The sporadic AD mice were fed fisetin along with their food daily for seven months. A control group of sporadic AD mice did not receive fisetin. Various memory and activity tests were administered throughout the study period.

The mice were also tested for specific proteins related to brain function, stress and inflammation.

The value of eating strawberries: A natural way to avoid age-related cognitive decline

The difference was dramatic. The mice not treated with fisetin showed elevated markers of inflammation and stress as well as difficulties on the cognitive tests. The mice who received fisetin did not show signs of age-related decline either physically or cognitively. There were also no signs of toxicity or side effects from taking the compound fisetin – even at high doses.

The research results were published in the June 2017 Journals of Gerontology Series A. It builds on the Salk team’s previous studies of fisetin as a treatment for age-related mental decline, Alzheimer’s disease and stroke.

In addition to strawberries, fisetin is found in apples, kiwis, mangoes, grapes, tomatoes and persimmons. It is also contained in vegetables like cucumbers and onions as well as some types of nuts. However, strawberries have the highest concentrations of this potent flavonoid.

No doubt, the anti-inflammatory and anticancer benefits of fisetin provide plenty of good reason to isolate this healing compound so that it can be taken as a preventative measure for cancer, neurodegenerative diseases and other age-related conditions.

Of course, we can all receive the health benefits of fisetin by simply eating more fresh, (organic) strawberries – whenever possible or grow them yourself, climate permitting.