Strawberries contaminated with pesticides and grown with poisonous gases 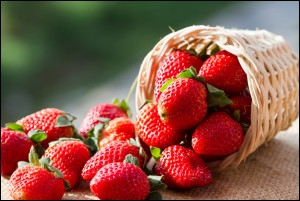 (NaturalHealth365) The U.S. grows an estimated 3 billion+ pounds of strawberries each year, with California producing over 90 percent of them. (Much of the rest are grown in Florida.) However, non-organic versions of this delicious fruit have proven not-so-delicious.

Independent testing has shown that non-organic strawberries are loaded with pesticides and poison gases. They have been at the top of the “Dirty Dozen” list for years and are considered “highly likely” to contain pesticide residue even after being washed. Other fruits and vegetables on the “Dirty Dozen” list include spinach, apples, nectarines, peaches and pears.

The reason WHY certain fruits get MORE pesticide contamination

Any fruit or vegetable with thin skin is at high risk for contamination. However, strawberries were found by the U.S. Department of Agriculture to contain around 8 pesticides for each sample taken – more than any other type of produce. The average for all produce types is 2.3 pesticides.

Over 30 percent of strawberries showed over 10 pesticide residues, and the dirtiest of the bunch tested for a startling 21 different kinds of pesticides.

In addition to pesticides, researchers also found traces of poisonous gases on non-organic strawberries. Bifenthrin and Carbendazim were found on one-third of all tested strawberry samples. These chemicals are associated with numerous health problems including neurological issues, reproductive damage, developmental problems and cancer.

The non-toxic advantage of organic strawberries

While in some cases just traces of these chemicals are left on the fruit after washing, over time these toxins can accumulate in the body. Gas poisoning and pesticide poisoning can occur over time as the body’s defenses are worn down.

Over time, this paves the way for the compromising of the immune system, leaving the body open to a range of diseases and health problems. Similar testing in Europe and other parts of the world has uncovered the same issues with pesticides in non-organic strawberries grown there.

If there is any “good” news to be found in all of this, it is the fact that organic strawberries did not show issues with pesticides or poisonous gases. The simple solution to avoiding pesticide poisoning from strawberries is to go organic – something that increasing numbers of people are doing already.

A Journal of Environmental Research study has shown that consuming an organic diet for just one week can reduce the pesticide levels in your system by as much as 90 percent! With such a dramatic difference in the quality of organic fruits and vegetables versus non-organic, the choice is a no-brainer.

While organic fruits and vegetables cost more, the benefits to your health are priceless. At the very least, strive to always choose organic versions of the items on the “Dirty Dozen” list to minimize your exposure to pesticides, poisonous gases and other harmful chemicals.

Editor’s note: I enjoy going to the local farmer’s market.  It’s a great way to find organic fruits and vegetables at a fraction of the cost.  Plus, it’s a nice way to make new friends and support local (healthy) agriculture.