By Raw Michelle
(NaturalNews) While most people who drink diet soda probably know it isn’t the healthiest choice, they still may be under the mistaken impression that it will keep their weight down. Scientific studies emphasize this is not true.

This was made clear in a recent study published in the Journal of the American Geriatrics Society in which 749 people were followed for nine years based on soda consumption, both diet and regular.

In perhaps graver news, a study published by the American Diabetes Association showed that daily consumption of diet soda was linked to a significantly greater risk of select metabolic syndrome components and type 2 diabetes. 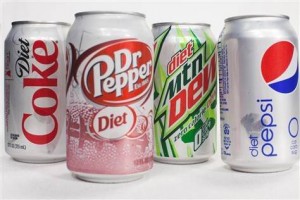 Metabolic syndrome is defined as a cluster of conditions – increased blood pressure, high blood sugar level, abnormal cholesterol levels, and excess body fat around the waist – that occur together, increasing the risk of heart disease, stroke and diabetes.

In more bad news for diet soda fans, a study in France that followed more than 66,000 women for 14 years found a strong correlation between those who drank artificially sweetened beverages and increased diabetes risk.

Particularly disturbing: Women who drank at least one 20-ounce diet soda per week had a risk for diabetes more than double that of women who did not consume any sweetened beverages.

The Multi-Ethnic Study of Atherosclerosis (MESA) showed that drinking diet soda at least once daily was associated with high waist circumference and a 67 percent greater risk of type 2 diabetes seven years later.

Adding insult to injury, in the San Antonio Heart Study, subjects of normal weight who consumed more than 20 diet beverages per week nearly doubled their risk of being overweight or obese over an eight-year time period.

So if you are hoping to save calories by grabbing a diet soda instead of a sugar-laden one, your intentions are positive, but you will get a poor return on your investment. Have a drink of water instead and you can prevent a multitude of health and weight problems.