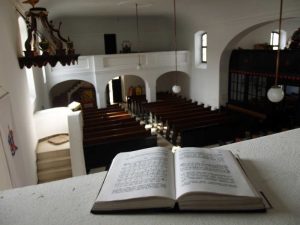 A study recently released by the Barna Group, led by longtime evangelical pollster George Barna, found that one-third of regular churchgoers questioned said that they did not watch services online and put church completely on pause during the apex of the pandemic. The number was even higher for those who identify as Millenials.

Barna published a report on Wednesday as part of its “New Sunday Morning” series, which analyzed church involvement during the pandemic. The research was conducted between April 28 and May 11 as 500 participants were asked about their church-related habits in the past month (late March – early April onward).

While 40% of Protestant pastors reported an increase in viewers, and while services were available on-demand to watch any day of the week at any time, 32%, or one-third, of those who attend church in person at least once a month said that they had not watched services online at all in the past month. 53% viewed streaming from their regular church.

48% of “churched” Christians, that is, those who have attended church in person at least once in the past six months, didn’t watch any online services in the past month.

Barna also noted that “[w]hen asked if they had ‘attended’ church within the past four weeks, exactly half of practicing Christian Millennials (50%) say they have not.”

“The percentages of Gen X and Boomers who have stopped attending online services (35% Gen X, 26% Boomers) are lower than among their younger counterparts, but still show the impact of COVID-19 precautions and regulations on what used to be a regular practice,” it explained.

When asked if they have had contact with a church leader at all in the past month, only 30% of practicing Christians replied in the affirmative.

Barna says that while the data may have “shifted in recent weeks as the pandemic has progressed,” the poll results “reflecting engagement during the height of the U.S. social distancing measures this spring — can be instructive for church leaders moving forward.”

As previously reported, in April, a survey conducted by The Center for Bible Engagement found that 34% percent of pastors polled agreed that they were “moderately” worried that in-person church attendance would fall after the lockdown was lifted and services resumed.

Some noted during the pandemic that staying home and watching services online or via television is no substitute for in-person assembly. A number of churches opted to hold drive-in services as an option for their congregation.

Hebrews 10:24-25 instructs, “[L]et us consider one another to provoke [each other] unto love and to good works, not forsaking the assembling of ourselves together, as the manner of some is, but exhorting one another — and so much the more as ye see the day approaching.”