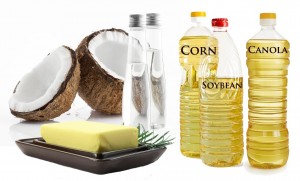 However, “fat” is a very general term and does not distinguish between traditional healthy fats and unhealthy modern processed fats and oils. The common belief is that saturated fat is the culprit in fatty liver disease, but a new study published in the July 4, 2017 European Journal of Nutrition comes to a different conclusion.

This peer reviewed study, “Chronic consumption of fructose in combination with trans fatty acids but not with saturated fatty acids induces nonalcoholic steatohepatitis with fibrosis in rats,” examined more closely the effects of trans fatty acids (from vegetable oils derived from corn and soybeans) versus saturated fats, found in traditional fats such as butter, coconut oil, and palm oil.

The study’s title gives away their conclusion: fructose is bad for the liver, but it is worse with trans fats than it is with saturated fats.

The study’s purpose was based on the premise that fats and fructose predominate in the Western diet do create NAFLD. The researchers’ concern was what type of fatty acids would worsen the condition of NAFLD to NASH.

This was an animal study using male Sprague–Dawley rats divided into six feeding groups over time. Each group was fed a different type of fat combined with what they called high fructose, which can be assumed to be high fructose corn syrup or HFCS.

The calorie count was the same for each group with 44 percent of the calories coming from high fructose with 39 percent taken by various high fats. The various food combinations fed the rats for 24 weeks were combined with high fructose with only one exception, the first one in the following list:

In other words, consuming trans-fatty partially hydrogenated vegetable oils (corn, soybean) that are heat processed is much worse for your liver than saturated fats (butter, coconut oil, palm oil).

This makes total sense, given the fact that polyunsaturated oils are prone to oxidation and free radical damage, whereas saturated fats are not.

A Slightly Misleading Factor in the Study

The rising obesity and NAFLD epidemic actually began with the rise of processed foods and soda consumption. All the while, high fructose corn syrup (HFCS) was replacing refined cane or beet sugar as a cheaper more effective sweetener while sugar cravings in the Western world increased exponentially.

HFCS was also increasingly used as a sweetener for pastries, candies, and even foods that are not tempting to the sweet tooth.

But sodas generally contained more HFCS than most other processed food, and sodas were being sold everywhere in increasingly larger serving amounts. HFCS is not to be confused with naturally occuring fructose in fruit. High fructose corn syrup is a highly condensed artificially contrived sweetener from corn syrup.

Aside from the obviously damaging factors of GMO corn sources and the byproduct of mercury involved with processing this stuff, HFCS presents metabolic problems with the liver. The liver can utilize only part of HFCS for energy. The rest gets stored as fat in the liver.

So combining saturated fats, especially coconut oil, with free form synthetically produced high fructose and finding it does produce nonalcoholic fatty liver is misleading since the key culprit is HFCS, which alone creates NAFLD over time. The study’s determination that trans-fatty acid fat makes NAFLD worse makes sense because wholesome saturated fats are healthy and protective. Saturated fats are natural and have been part of the food chain for many thousands of years, whereas processed foods, including modern vegetable oils, are a recent development in human nutrition.

Trans-fats are harmful because they are difficult to digest, damage cell walls, and cause inflammation. Inflammation is the source of almost all autoimmune diseases and metabolic disorder syndromes leading to obesity, diabetes, and heart disease.

Trans-fats also inflame the outer layers of the inner walls of blood vessels, known as the endothelium. This leads to vascular inflammation that causes problems, which cholesterol attempts to patch up and then gets blamed for the final arterial collapse caused by the inflammation.

Coconut oil is especially healthy because it is a medium chain fatty triglyceride or MCT based natural plant oil. The liver converts MCTs easily and rapidly to energy as ketones. Fat does not get stored in the liver.

Ketones are effective at combating metabolic disorder syndrome and supplying energy to brains that are insulin resistant and ineffective at converting glucose to energy. This is why many with dementia issues of a broad spectrum improve with heavy coconut oil consumption. (Source)

Trans-fatty acid oils and margarine are ubiquitous in processed food and fast food restaurants, along with some not-so-fast restaurants. They should be avoided, which has been made easier with the requirement to label them as such on the ingredient labels.

All liquid vegetable oils that are not cold pressed with partially hydrogenated on their labels are very problematic. Used cold pressed virgin olive oils instead. Margarine is almost totally hydrogenated. You’re better off with butter of almost any caliber, but organic butter from pasture raised cows is best.

Consume alcohol very moderately or not at all. Avoid over the counter pain killers such as Tylenol that contain acetaminophen, which is a proven liver toxin that can cause liver death and kill that liver’s host. (Source)

Mainstream medicine marginalizes nutritional solutions to existing medical conditions. It considers liver damage irreparable. But the right combination of nutrition and supplements has been clinically proven to reverse even cirrhosis of the liver among patients scheduled for liver transplants.

The late Dr. Nicholas Gonzalez and the Gerson therapy for cancer have successfully used coffee enemas to detox livers overwhelmed by toxins. Coffee enemas are useful adjuncts to any liver work. It is another therapy that Big Pharma doesn’t want you to know about. The source provided in parenthesis explains more. (Source)

If you’re fortunate enough to live in a legal medical marijuana state, now there is growing evidence that full cannabinioid spectrum cannabis oil helps reverse liver disease. Some states have included hepatitis C as one of its allowed ailments. Since the hepatitis C virus has never been actually isolated, it’s evident that Hep C is more about inflammation than viral loads. (Sources)

So the solutions for both avoiding and reversing non-alcoholic fatty liver and its subsequent consequences of other metabolic diseases is in your hands. Research more and ignore the so-called “science” from the pharma-sponsored “mainstream” corporate media who have circled the wagons to protect the pharmaceutical and processed food industries.