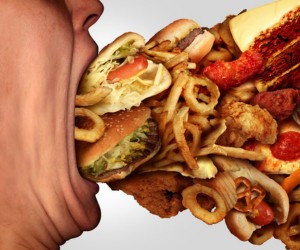 (NaturalHealth365) While most people are aware of the health hazards of eating too many processed foods, conventional ‘wisdom’ would have us believe that the connection between our diet and disease is more “complex,” than it really is.

For example, an experiment has made a clear connection between processed foods and their impact on gut bacteria levels. Keep in mind, we know that the gut is responsible for immune system health – which, by its very nature, is the basis of good health or disease risk.

Some experts believe it’s the (toxic) fat in these foods that cause the most problems; others say it’s the (denatured) simple sugars, the preservatives, the processing these foods undergo – or perhaps a combination of some or all of these factors. What’s certain, however, is that over time these foods can cause chronic inflammation and cellular toxicity – the foundations of disease.

British professor Tim Spector and his college age son Tom recently conducted an experiment. The younger Spector ate nothing but McDonald’s food for 10 days. The goal was to determine the precise effects of fast food on gut bacteria within the digestive system and microbiome.

Fecal samples were taken before, during and after the study period to assess internal bacterial composition. Tom reported feeling good for the first three days of the study (and enjoying the envy of his friends as he feasted on fast food at each meal.) However, by the fourth day he reported “going downhill” very quickly.

He became lethargic and was told by his friends his skin had turned “a grey color.” The remaining six days of the study period were a major struggle, especially the last few days. He reported feeling unwell, and once the 10 days were over, he rushed to have a salad and some fresh fruit.

It took a few months to get the final lab results for the experiment from Cornell University in U.S. as well as the British Gut Project, a crowdsourced project allowing anyone to get their gut microbiome tested with the results published online for anyone to see and analyze. However, the results were consistent: Tom’s microbiome had been devastated by the 10-day fast food diet.

Massive shifts in common microbe groups were detected. Bacteroidetes had replaced Firmicutes as the dominant type. Levels of friendly anti-inflammatory bifidobacteria had been cut in half.

The biggest indicator of problems in the gut is a loss of diversity in gut bacteria. Just a few days into the 10-day study, Tom had lost around 40 percent of his total bacteria species – around 1,400 types. Even more disturbing was that two weeks after the study, his gut microbiome had still not recovered.

Probiotics aid in gut bacteria recovery within the microbiome

Loss of gut diversity is associated with a suppressed immune system, heightened inflammation, increased allergies and a higher risk of illness. It can even dull mental acuity and depress mood.

These microorganisms are crucial to digesting food and absorbing its nutrients. Without them, the whole system suffers.

Between too many processed foods and the overuse of antibiotics, the American gut microbiome has taken a beating. No doubt, including more probiotics and prebiotics (fiber) in the diet can assist with raising levels of beneficial bacteria.

Natural probiotics include fermented foods like miso, sauerkraut and pickled vegetables – to name a few. However, in some cases, you may want to consider taking a (high-quality) probiotic supplement – containing specific strains depending upon your health needs.

Check with an experienced, integrative healthcare provider to see what’s best for you – especially if you suffer from any chronic health condition.