(WNS)–Authorities in Sudan demolished the last remaining church in the country’s southeast Soba Aradi district on May 7. Soba Al Aradi Church, part of the Sudan Church of Christ, was one of 27 churches fighting a government order mandating the church lands be confiscated and their buildings torn down because they were constructed on land designated for other uses.

The government demolished 12 other churches in the past six years, and has prevented them from constructing new buildings.

Officials from the National Intelligence and Security Service and riot police arrived at the church to begin the demolition Sunday afternoon, Christian Solidarity Worldwide said. The officials tore down the sanctuary, two offices, and the Sunday school center. Intelligence officials also detained and interrogated two church members who refused to unlock the church gates for the demolition crew.

Government officials said they gave the church one week’s notice, but church leaders claim they were not notified of the demolition. 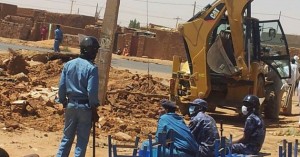 The Sudanese government has said no new churches can be built, and church leaders claim the government has repeatedly refused to issue them building permits whenever they apply. The country’s administrative court recently dismissed a suit filed jointly by all 27 churches against the demolition.

Christians in the community told Christian Solidarity Worldwide the Soba Aradi district once had 13 churches across denominations before demolitions began in 2011 under a government redevelopment plan.

Middle East Concern, a nonprofit that advocates for religious freedom, said the church plans to take legal action against the state for the demolition. Church members have said they will continue holding their weekly prayer meetings by the rubble.

Sudan ranks fifth on Open Door’s 2017 World Watch List that includes 50 of the most difficult countries for Christians. The United States Commission on International Religious Freedom last month recommended that the United States again designate Sudan among the top 10 countries of particular concern. The report has listed Sudan as a country of particular concern for the past 17 years.

Sudanese Christians continue to face persistent attacks in the country. In April, a group stabbed and killed an elder of the Sudan Evangelical Presbyterian Church (SEPC) during a peaceful protest at a church-run school. School teachers and other Christians were protesting the unauthorized sale of the church’s land. A police-backed mob later broke into the church and arrested the guard’s wife and three children.

Mervyn Thomas, the chief executive of Christian Solidarity Worldwide, described the ongoing church demolitions and lack of due process as alarming. Thomas called on the international community to ensure Sudan’s government respects its citizens’ right to freedom of religion or belief.

“While the government continues to present these cases as a purely administrative matter, the fact remains that the destruction of houses of worship violates all international norms, as does the use of excessive force on civilians who are peaceably exercising their right to worship in communion with others,” Thomas said in a statement.