(WNS)–The credits rolled at a screening and an audience at a Chelsea theater in New York City erupted in extended applause for a middle-aged, theologically conservative Lutheran as he walked to the front, his son in tow. Jay Reinke is the central character in an award-winning documentary The Overnighters that had its New York premiere at the Tribeca Film Festival. The film shows Reinke serving as the pastor of a Missouri Synod Lutheran church in one of North Dakota’s fracking boom towns that have been inundated with male laborers. The population has expanded so quickly that housing is expensive or impossible to find; RV camps pop up everywhere, and workers sleep in their cars.

Williston, the North Dakota town at the center of the film, bans RVs and tries to prevent the men, some former convicts and drug addicts, from parking anywhere overnight. Despite the town’s hostility, Reinke’s church decided to open its doors and let men looking for work sleep in the church and its parking lot. Over two years, until the city shut down the church’s program, the church hosted, prayed with, and preached to 1,000 overnighters. They work on resumés together and share job contacts and discuss family problems. It’s a fantastically complex film that treats its Christian subjects fairly and compassionately. 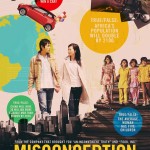 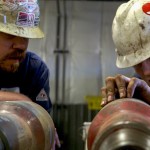 The Tribeca Film Festival, though only 12 years old, is growing into one of the major festivals along with Sundance, Toronto, and South By Southwest. The festival circuit has grown more and more influential as independent films draw wider audiences and more dollars. The Overnighters wasn’t the only film at Tribeca with a religious main character, a small indication of a shifting attitude among the film elite. The Overnighters won an award at Sundance and already has a distributor, Drafthouse Films, which is scheduling a theatrical release in November.

Gaining access to major festivals is hard enough; a theatrical release is the stuff of filmmakers’ dreams. Drafthouse plans to adopt a new distribution strategy so the film screens beyond art house theaters. If a community has enough people who want to see the film, Drafthouse will help them book a showing in their town.

At a coffee shop in Chelsea between screenings of his film, I asked Jesse Moss, director of The Overnighters, if he thought he faced any barriers to getting a film into festivals with a devout Christian as the main character. First of all, he said directors who want to get into festivals just need to make good films, regardless of religious content. But he’s noticed “a real appetite” for films about issues of faith.

Craig Detweiler, a film professor at Pepperdine University in Malibu, Calif., has noticed the same thing over the decade he has taken a group of his students to Sundance, along with film students from other Christian colleges on the West Coast. Detweiler has seen more openness to religion at festivals, which he attributes to a postmodern society where everyone has a camera and a seat at the table. “In an earlier era film festivals might have been comfortable presenting one-sided attacks on religion,” Detweiler said. “I think we’re just seeing the first wave of what has been building over 20 years. … Independent film at its best is about crossing borders and lifting alternative voices.”

MOSS, WHO LIVES IN SAN FRANCISCO, does not consider himself religious and had not intended to make a film centered on a church and a pastor when he went out to make a documentary on the fracking boom. “I think if you had asked me three years ago, could I ever imagine making a film about a Lutheran pastor in a church, I’d say no,” he said. As Moss spent more time in Williston, he realized that the pastor should be the center of the story, a “prism,” he says, through which to see the economic struggle of the men drawn to the boom town. The film has echoes of John Steinbeck’s Grapes of Wrath—the struggle of the lower class seeking opportunity in an unknown place, where few people have compassion for their plight. One overnighter who finally gets a construction job, leaves the church, and rents a ramshackle room finds out that his wife at home has left him for another man. As he packs his bags to go try to win her back, he mourns that he came out to provide for his family, and it will perhaps cost him his family.

The thousands still flocking to North Dakota are part of an “age-old American journey” to the frontier in search of opportunity, said Moss. “We know from the gold rush of 1849, all those guys that went out there to mine for gold really found very little. They found, maybe, something else,” he said. “So I wanted to follow people, including Jay, to see whether this boom brought redemption and opportunity and promise that they were seeking or whether it was fool’s gold–whether the reality of leaving your home and family behind and thinking you can go out and start a new life and save yourself or save your family, whether that’s an illusion. And I don’t think it is, but the reality of surviving in Williston is much, much harder than people realize.”

Reinke was “at the pinch point of these tremendous forces,” Moss said. The film presents Reinke as a hero, but a flawed hero. True generosity has a cost. “You and I are a lot more alike that we are different,” Reinke tells a drug addict staying in the church in the film. “I’m broken, we’re broken.” Those in churches and nonprofits will find the film painful to watch, because the story is familiar in the pitfalls of well-intentioned ministry and the personal failings of leaders. Moss produced an honest, messy story that comes from spending 18 months watching an overstretched church and an overstretched pastor.

The film festival audiences didn’t all react warmly. In a brief discussion with Moss and Reinke after the screening of The Overnighters, one woman stood up and told Reinke that his faith was “silly,” and that he was “anti-Semitic” for pushing “your version of Christianity.” She concluded, “The pastor was promoting a Nazi environment.” Audience members began to boo and shout at her, but Moss immediately stepped in to defend Reinke: “What I saw in that church was America. Next question.”

Another woman stood up a few minutes later. “I just want to dispute what the other lady said,” she began. “I thought I was going to see something about a pastor and religion and I was leery. Or about fracking and I was going to be [ticked] off. But I loved the film. Thank you.”

Audience members swarmed Reinke after, and he unobtrusively shared his faith. As they praised his service, he talked about Lutheran liturgy, where you recite, “Lord, your Word is true, I have sinned,” at the opening of services. It’s not, Lord, here are the good things I’ve done this week, he told a knot of Manhattanites around him.

ONE REASON DOCUMENTARY FILMMAKERS may not make many films about devout Christians is that they sometimes struggle to find willing subjects. Another major documentary at Tribeca, Misconception, had an evangelical Christian as one of three main characters. The film by Oscar-winning director Jessica Yu is about population trends and follows three story lines: a Chinese bachelor frustrated in his search for a wife under the one-child policy; an evangelical Christian and pro-life advocate at the UN; and a Ugandan journalist who writes about abandoned children.

In producing Misconception, Yu wanted to highlight religious advocates at the UN and met with the coalition of pro-life groups there. They all refused to participate in the film, except for Denise Mountenay, who is winningly earnest in her faith but said enough cringeworthy comments that she was probably not the best representative of the group. (When Mountenay is meeting with the delegate from Bangladesh about abortion, she gives him a model of a baby at 10 weeks in brown plastic and says: “It’s your color!”) The audience laughed at Mountenay through the film, though she was sitting in the audience. Still, she gamely went to the front for questions after and said she loved the film.

“There’s some mistrust [from Christians] and I understand that,” said Yu in an interview. “But I think that’s what leads to the lack of communication. We did want to tell the story from a perspective you don’t see a lot at film festivals.”

Moss in filming The Overnighters put considerable effort into building relationships in the church; he went by himself instead of with a crew, to be more approachable. For six months of the filming, he slept in the church with all the men, but members of the church still felt that he shouldn’t be intruding.

“It would have been nice if they had been a little more forthcoming, but I don’t think they’re painted in a reductive way. I think they’re really dignified in their voice, because they deserve to be,” Moss said. “I would love to show this in churches, in seminaries across America, if they would have me.”