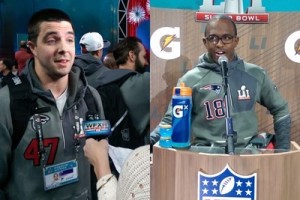 HOUSTON (BP) — They work at a job where millions of people watch them. They are cheered, admired, lauded and pampered. People recognize them, hound them for autographs and care what they have to say.

Falcons’ long snapper Josh Harris and Patriots’ wide receiver Matthew Slater share how professional athletes often struggle with pride. “As soon as I start believing in what I’ve accomplished on the field or believing what people say about me as a person, that’s the minute that pride can well up in you and become an issue,” Slater says.

Welcome to life in the NFL — or in any professional sport, for that matter — where the very nature of the job can easily lend itself to pride or arrogance for those who aren’t careful.

For Christian athletes, pride can be a serious temptation and a nemesis that has to be fought.

“Pride is one of my biggest sins, by far,” New England Patriots tackle Nate Solder told Baptist Press during Super Bowl Opening Night Jan. 30 at Minute Maid Park in Houston. “Luckily I have an awesome wife who knows me so well and knows that I’m not that good.

“I do a lot of talking with Jesus about [the mistakes I make] on a daily basis,” Solder continued. “He reminds me, too. I just rely on Him.”

Daniel Gray, an assistant chaplain for the Atlanta Falcons and young adult pastor at The Church at Chapelhill in Atlanta, said pride is one of the biggest struggles for the players to whom he ministers. Gray said it’s easy to forget that the bulk of NFL players are only young men in their 20s.

“They have the same issues as anybody else in their season of life,” Gray said. “The only difference is, they have a lot more money.”

With the accolades and attention that NFL players get, Gray said it’s important for Christian athletes to humble themselves.

Some players point to their families as a major weapon in the fight against pride.

“I think it is something that we all deal with,” said Jacob Tamme, tight end for Atlanta. “I’m pretty blessed to have a family that keeps me grounded. I’ve never seen myself as some kind of important person in that way. I grew up in a small town in Kentucky, and I still feel like that kid. I can’t believe that I’ve been able to do this for nine years.”

For others, pride isn’t as big of an issue, because they’re not in the spotlight as much as their teammates. Take Josh Harris, the Falcons’ long snapper, for example. His job is mostly an anonymous one, with people only noticing him when he messes up.

“Going unnoticed is a good thing,” he said.

Still, even in such a role, pride can be a temptation, and Harris said it’s important for him not to worry about what other people think or how they perceive him.

As a Christian, Harris said, “You’re loved from the beginning, and there’s nothing you can do that’s going to change that. I find a lot of peace and a lot of comfort in reminding myself of that and in knowing that.”

New England defensive back Jordan Richards said it’s important to remember his creator and what God’s intention is for him.

“He’s intended you to glorify Himself and doing that by serving others,” Richards said. “It’s not about me personally. It’s about Him. It’s something that I struggle with all the time in terms of being competitive and wanting to always win.”

Richards’ teammate, Matthew Slater, said he tries to remind himself who he is at his core.

“I’m really nothing without Christ,” said Slater, a wide receiver and special teams player for the Patriots. “As soon as I start believing in what I’ve accomplished on the field or believing what people say about me as a person, that’s the minute that pride can well up in you and become an issue.

“I know I’m a sinner and that I need God’s grace every day,” he continued. “I think it’s important for me to remind myself of that every morning when I wake up.”

And if Slater forgets?

“I have a beautiful wife who can do it for me if I don’t remember.”