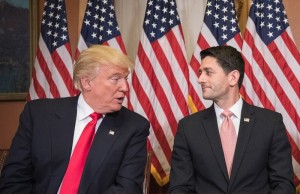 If this is the budget deal we get when Republicans control the House, the Senate and the presidency, there’s no point in ever voting for a Republican again.

Not only is there no funding for a wall, but — thanks to the deft negotiating skills of House Speaker Paul Ryan — the bill actually prohibits money from being spent on a wall.

At a CYA press conference recently, Trump’s ridiculously chipper budget director, Mick Mulvaney, described the bill’s prohibition on building a wall as a MAJOR win. (At least Mulvaney said it in English, unlike his all-Spanish 2014 townhall.)

True, there will be no wall. But the Democrats graciously agreed to allow the administration to fix broken parts of any existing fences on up to 40 miles of our 3,000-mile border. The other big wins, according to Mulvaney, are:

1) more defense spending, which is fantastic news, because I was worried Boeing and Lockheed Martin CEOs were falling behind Mark Zuckerberg with their gluttonous salaries; and

But Mulvaney assures us that this monstrosity of a spending bill has set things up beautifully for the next budget negotiation in October. That has become the GOP’s official motto: “Next time!”

We can never win this time. Instead, Republicans’ idea is always to surrender this time, in hopes that their gentlemanliness will be rewarded by their mortal enemies next time. Then, next time comes, and Republicans again surrender in hopes of currying favor with the Democrats and the media for the next time.

Mulvaney’s most disturbing comment was to say that what upset Trump the most was the Democrats’ “spiking the football” on this deal.

Apparently, Trump’s fine with no wall — and everything else in a bill straight out of George Soros’ dream journal — if only the Democrats hadn’t been so rude as to tell the public about it. When your main complaint is that the other side is gloating too much, maybe you’re not that great a negotiator.

Yeah, sure, it’s only 100 days in, it’s an artificial deadline, the media is dying to say Trump has failed and so on.

Except: Planning for the wall should have begun on Nov. 9, and a spade should have been put into the earth to begin building it the day after Trump’s inauguration. Now, it’s 100 days later, and we still don’t have the whisper of a prospect of a wall.

Moreover, this isn’t one random bill funding Planned Parenthood (which this bill does). This is the budget deal. There won’t be another one like it until next October. That’s a spectacular failure. Democrats have got to be pinching themselves, thinking, Am I dreaming this?

It’s theoretically possible that Trump could still build a wall, but he’s just massively lengthened the odds of ever prevailing. Sure, you can let the other team build a 20-point lead in first half and still come back to beat them, but it’s a lot easier if you don’t go into halftime 20 points down.

Trump entered the presidency with the only kind of power that matters. He didn’t owe Wall Street a thing. He didn’t owe anyone — not donors, lobbyists nor any political party. What he had was the people, passionately on his side.

But as soon as he got into office, Trump started giving away his miraculous, unprecedented power. Hey, Wall Street! Even though you didn’t give me any money, is it too late to be your friend?

No amount of abandoning his supporters will get Trump anywhere with Wall Street, Hollywood or the media. Their ferocity will simply shift to ridicule.

Admittedly, Trump has the enormous handicap of having to work through congressional Republicans, who are feckless cowards. If Speaker Ryan and Senate Leader Mitch McConnell had been around for Reagan’s firing of the air traffic controllers, they would have been hysterically screaming, No! You can’t do that — the planes will crash!

This isn’t new information. We knew Washington Republicans were useless. That’s why we elected such a comically improbable president as Donald J. Trump. The deal was that we were getting the Hollywood version of a New York businessman: an uncouth, incurious rube — who would be ruthless in getting whatever he wanted.

In addition to being the only candidate for president in either party taking America’s side on trade, immigration, jobs and crime, what set Trump apart was his promise that we would finally win.

Remember? There would be so much winning, we were going to get “sick and tired of winning,” and beg him, “Please, please, we can’t win anymore. … It’s too much. It’s not fair to everybody else.” We’re not winning. We’re losing, and we’re losing on the central promise of Trump’s campaign.

How would Trump, the businessman, react if an underling charged with developing a new golf course could never break ground?

What if the subordinate’s progress reports sounded like this: I have given 21 speeches to various chambers of commerce and neighborhood groups, assuring them that there’s going to be a golf course. Everywhere I go, I say, “Don’t worry about it. It’s going to be built!” I have started a commission to study developing a golf course. I have put up a sign saying, “Golf course coming!” And I have caved, and caved, and caved — so now our opponents know what good guys we are.

Trump would fire that employee so fast your head would spin. We want the ruthless businessman we were promised.