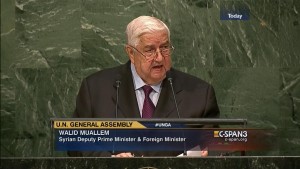 UN General Assembly – The Syrian Government has spared no effort to put an end to the war that has besieged the country for the past six years, but the bloodshed continues owing to the “aggressive policies” by some States, Deputy Prime Minister Walid Al-Moualem told the United Nations General Assembly.

“No people has suffered at the hands of terrorism more than the Syrian people, who, for six years now, has fought against terrorists pouring from all over the world, supported by parties from the region and beyond,” said Mr. Al-Moualem, who is also the country’s Minister for Foreign Affairs.

Since March 2011, Syria has been in the throes of a conflict that has forced more than half of all Syrians to leave their homes. An estimated 5 million Syrians have fled the country and more than 6 million are internally displaced. The crisis, described as the worst humanitarian disaster of our time with more than 13 million people in need of assistance, has caused untold suffering for Syrian men, women and children.

The UN Special Envoy for Syria, Staffan de Mistura, has been working to bring the parties to the negotiating table and an end to the war.

Mr. Al-Moualem stated that since day one, the Syrian Government has positively considered all initiatives to put an end to the war. “However, these initiatives eventually failed after States that supported and fueled terrorism decided to persist in their aggressive policies against Syria and its people.”

He noted that the so-called ‘Geneva process’ has yet to bear fruit “in the absence of a genuine national opposition that can be a partner in Syria’s future, and as countries with influence over the other party continue to block any meaningful progress.”

“It is truly unfortunate that these countries that block a solution in Syria are members of this international Organization, including permanent members of the Security Council,” he added.

Certain countries, the Prime Minister said, have boasted about fighting terrorism in Syria and having the interests of Syrians at heart. “They have established ‘coalitions’ and held dozens of conferences under deceiving titles, such as ‘friends of the Syrian people’.

“It is quite ironic that those are the same countries that are shedding the blood of thousands of Syrians by supporting terrorists, bombing innocent civilians, and destroying their livelihoods.” 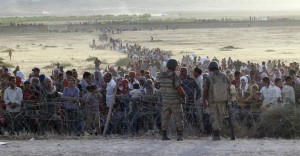 Syria was, however, encouraged by the Astana process and the resulting ‘de-escalation zones’ and hoped that it will result in an actual cessation of hostilities and separate terrorist groups, such as ISIL, Al-Nusra and others, from those groups that have agreed to join the Astana process.

“This will be the real test of how committed and serious these groups and their ‘Turkish’ sponsors are,” said Mr. Al-Moualem.

“So far, Turkey under Erdogan has persisted in its aggressive policies against the Syrian people and has continued to labor under the illusion that terrorism will help serve its subversive agendas in Syria and the countries of the region. Turkey’s position stands in stark contrast to the positive and constructive role played by Russia and Iran,” he added.