Tel Aviv Cafe Fined for Closing on the Sabbath

A Tel Aviv cafe was fined last week for closing on Saturday, the Jewish Sabbath. The move caused a social media firestorm, prompting the management of the shopping center to cancel the fine on its tenant, but not before it came to the attention of members of the Israeli parliament.

According to a report by Israel Hayom, the owner of Henri’s Cafe at the Sarona Market was slapped with a 3,500 NIS (about $950) fine for closing on the Sabbath (Shabbat). Typically, however, it is businesses which open on Shabbat which are fined, in accordance with city by-laws.

Ofer Liperman, who operates the branch of the cafe chain, told the paper that the “franchise owner told the market’s management that he couldn’t commit to the clause in their contract compelling him to open the branch on Shabbat, to which they responded by reassuring him that the written agreement was one thing, and their oral arrangement was another, and that everything would be all right.” 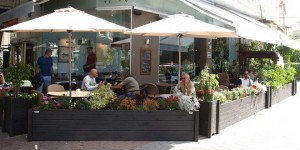 When patron Maayan Cohen Adiv heard of the fine on Tuesday, she took to Facebook in indignation. Her complaint quickly went viral. The negative publicity prompted the Sarona Market to cancel the fine on Wednesday.

Liperman says he was not looking for a fight. “I am a private person who observes Shabbat. I don’t want to start a religious or Shabbat war. When I first saw the contract I immediately said I don’t work on Saturdays and I was promised an informal understanding on the matter had been reached,” Liperman said. “I heard the fine was canceled, but that the matter will be debated in court. We didn’t ask for this fight.”

The Sarona Market issued a statement defending its actions, saying the matter would be resolved in court. “Henri’s Cafe was in clear breach of contract and as a result a fine was imposed, as customary in these types of agreements. It should be made clear that the fine was not imposed over the business’s decision to remain closed on Shabbat, but for its breaching its contract. Sarona Market includes several kosher businesses that do not operate on Saturdays as part of their contract. Management has decided to cancel the fine as a show of public responsibility. However, we will pursue the matter further with the relevant legal authorities,” the statement said.

Economy and Trade Minister Aryeh Deri, leader of the religious Shas party, responded to the controversy. “Due to a rise in the number of businesses staying open on Shabbat, businesses that remain closed collapse. I have been approached by many business owners, operating in large shopping centers across Israel, who told me that their businesses are in danger because the neighboring businesses operate on Saturdays, while they observe Shabbat and remain closed. They fear they will have no choice but to work on Saturdays or face financial ruin.

“And if that wasn’t bad enough, now we are facing an absurd situation where shopping centers like Sarona are fining businesses that observe Shabbat and remain closed. This will only make a bad situation worse.”

According to Israeli law, art and cultural venues, gas stations, restaurants and cafes may open on Shabbat, but other businesses must remain closed. Municipalities are required to enforce these laws with fines, especially when it comes to local by-laws. However, it is illegal to penalize anyone for refusing to work on Shabbat.