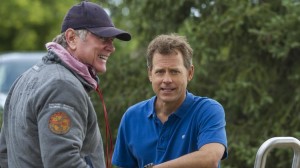 (WNS)–Randall Wallace has serious Hollywood credentials. He received an Academy Award nomination for writing the screenplay for the Mel Gibson movie Braveheart. He directed Gibson in the Vietnam War movie, We Were Soldiers. His other directing credits include Secretariat and this year’s Heaven Is For Real. We had this conversation in Los Angeles at the premier for that movie.

You wrote the screenplay for Braveheart. I’ve talked to some of our mutual friends who told me that while William Wallace may be an aggregate of historical figures, the person he resembles most is Randall Wallace.  How do you answer that charge, sir? Guilty. I think, in a certain way, that all art reflects the artist. I spoke with a history professor once about the notion of getting history right. And the professor said, “Well, history doesn’t reflect the time it’s written about as much as it reflects the time in which it is written.” All of us are trying to tell the story that lands for us, is the most relevant. That’s probably true with Braveheart, as well.

Braveheart, We Were Soldiers, and Heaven Is For Real all include biblical ideas.  Talk to me a little bit about why these stories appeal to you. It’s a core thing with me. When Mel and I started working together for the first time, we were talking about casting. Mel said, “Cast people who are the way you want them to play. They are, in their core, that character.” I think that who we are shows in the kind of stories that we tell. That means we have to work on who we are. These are stories that show a character in that ultimate decision-making place. … One of the greatest movies I ever saw was A Man For All Seasons. There’s a moment in that in which the Thomas Moore character says, “A moment comes when you hold your immortal soul in your hands.” And I think that those are the moments that I look for in my life, in what I choose to write about and in the characters that do this in those movies.

Do you have any other projects on the horizon? My friend Jill Conner Browne, who’s a fantastic writer, has got the greatest phrase. She says, “When I finish this, all I want to do is lie down.” And I’ve told myself, I just want to take a break. As soon as you say that, the phone starts ringing off the hook. I’ve been working on a project about the Civil War that I’m really excited about. I’ve got a project that’s called Love And Honor that Channing Tatum and I have been trying to do for a long time. It’s set in the Revolutionary War. I’m not ever going to work again; I’m only going to do things that aren’t work at all. They’re just labors of love.

Caption: Director Randall Wallace, left, and Greg Kinnear on the set of “Heaven Is for Real.”