‘Temple: Amazing New Discoveries That Change Everything About the Location of Solomon’s Temple,’ an astonishing new book by Robert Cornuke 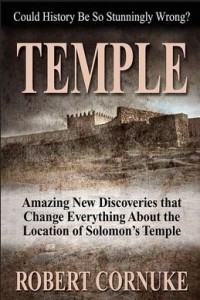 COLORADO SPRINGS, CO (ANS) — Robert (Bob) Cornuke, a former police investigator and SWAT team member, is a biblical investigator, international explorer, and author of nine books. He has participated in over fifty expeditions around the world searching for lost locations described in the Bible.

He has followed ancient accounts of the Ark of the Covenant from Israel to Egypt and across Ethiopian highlands, and, most recently, his research team found the probable location of Paul’s shipwreck off the coast of Malta. This find has resulted in the accounting of what many are saying are all four anchors, as described in Acts: 27.These journeys include searching for Mount Sinai in Egypt and Saudi Arabia, looking for the remains of Noah’s Ark in Turkey with astronaut Jim Irwin (the eighth man to walk on the moon) and researching ancient Assyrian and Babylonian flood accounts in Iran.

However, his most recent adventure is sparking international controversy. Chronicled in his new book “Temple: Amazing New Discoveries That Change Everything About the Location of Solomon’s Temple”, Cornuke makes the assertion that the Temples of Solomon and Herod are located in the City of David and not on the traditional temple mount platform.

In his just released book that is being heralded as an “investigative masterpiece” with ” astounding archaeological and prophetic implications,” “Temple” is said to be sending shock-waves through the Jewish, Muslim, and Christian worlds.

He asks if we can imagine the upheaval in political and religious thinking if the Temple Mount in Jerusalem is not the site of Solomon’s and Herod’s temples? And what if the stones of the Wailing Wall are not what tradition says? In this highly-researched, exciting book, the author proposes from current archaeological excavations and Scriptural corroboration that the true temple location is not where tradition teaches. Even more astounding is what has been uncovered concerning the Ark of the Covenant and the location of the future Millennial temple.

This is must reading for anyone who wants to fit together the pieces of biblical records, current geo-politics, and prophecy.

Cornuke says, “Let the adventure begin as we now take the Bible in one hand and a shovel in the other and dig up some long-lost buried bones of biblical history. Along the way we will walk unknown passageways, known only to the prophets of old, as we search for the true location of the lost temples of Solomon and Herod. We will also lift a candle into the dim recesses of history and uncover secrets about the Ark of the Covenant and the gold Mercy Seat’s prophetic obligation as it relates to the future Millennial temple.”

Norman H. Andersson, A retired U.S. Brigadier General, says, “This book shatters flawed traditions and rips the lid completely off historical misunderstandings. It will most certainly give intellectual whiplash to anyone bold enough to read this biblical investigative masterpiece.”

While Paul Feinberg, PhD states, “This book is beyond revolutionary in scope and context. The prophetic implications are absolutely astounding and the political repercussions from it could alter the complexion of the entire Middle East.”

Robert Cornuke has appeared on National Geographic Channel, CBS, NBC’s Dateline, Good Morning America, CNN, MSNBC, Fox, ABC, History Channel and Ripley’s Believe It or Not. He has authored several books and traveled across Afghanistan during U.S. bombing strikes on a video and photographic assignment.

Bob has earned a Masters of Arts Biblical Studies and a Ph.D. in Bible and Theology from Louisiana Baptist University, but his children believe that his most notable accomplishment, to date, is having his findings featured as a question on a Trivial PursuitT card.He is currently the President of the Bible Archaeology Search and Exploration (BASE) Institute located in Colorado Springs, CO. He also serves as special advisor for the National Council on Bible Curriculum in Public Schools and was invited by the President’s staff to conduct a Bible study for White House personnel.

While serving as a crime scene investigator assigned to major crime scenes, Bob gained invaluable training and experience in investigative and scientific research techniques. He has now turned his investigative skills toward Bible archaeology, using those skills and ingenuity to unlock the doors to sites that often go against traditional archaeological presuppositions. Bob is currently the host of the weekly Television show “Gutsy Christianity” o n Direct TV on the National Religious Broadcasting Network (NRB).

Originally sought-out by astronaut James Irwin (Apollo 15) as a security advisor, Bob was later recruited to join the expedition as they searched for the remains of Noah’s Ark in Eastern Turkey.

His assignment was to provide protection for Irwin’s team as they operated in the Kurdish-terrorist held region, but, upon completion of the Mount Ararat expedition, Cornuke and Irwin found themselves colleagues and close friends. Bob later became vice president of Irwin’s “High Flight” Foundation, an exploration consortium dedicated to the search for lost biblical locations and artifacts. Several years after Irwin’s death, Cornuke founded BASE Institute to expand on the Mission of his mentor and friend.

When not traveling the world, Bob lives in Colorado with his wife and children. From a majestic hillside near Pikes Peak, an expedition landmark for explorers from yesteryear, Bob directs the modern day efforts of the staff and volunteers of the Bible Arc haeology, Research & Exploration Institute.