The Temple Institute and the School for Temple Knowledge held an “Alpha Wine” conference to investigate all aspects of wine, theoretical and practical, as they pertain to Third Temple. The conference paved the way for the production of wine suitable to be used in the Temple service, adhering to the laws concerning the growing and production of what Jewish tradition states is the best wine possible.

Torah scholars, agronomists, scientists, and vintners gathered recently at Bar Ilan University. Their goal was to combine their knowledge for the purposes of reinstating the production of wine fitting to be used in the Third Temple.

Though wine was a major industry in ancient Israel and is burgeoning today, wine prepared for the Temple was prepared in a special manner. In a commercial vineyard, the vines are suspended above the ground. Grapes used to make wine destined for the Temple must be grown directly on the ground. Grapes were crushed by treading on them, since crushing the grapes by other methods breaks the seed, making the wine bitter. The laws concerning the production of the wine are numerous and complicated, but the term ‘Alpha’, used in the Talmud, is used to describe the superior quality of the Temple wine. 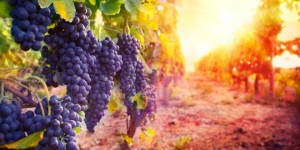 One example of the unique quality of Temple wine was described at length by Dr. Shivi Drori, He described his efforts to discover the original varieties of grapes grown in Israel. Dr. Drori explained that grapes intended for the Temple were grown only in the central mountain region of Israel. As a result of his studies into the genetics of dozens of varieties, he concluded that the original variety of grapes used for the Temple was vitis vinifera, a species native to the Mediterranean region.

Though priests are forbidden from drinking wine in the Temple, it was an essential part of the Temple service. A quarter hin (approximately one quart) of wine was poured on the altar every morning and special libations were performed on the festivals.

Wine is a special crop, mentioned as one of the plant species which bore a special blessing for Israel. A land of wheat and barley, and vines and fig-trees and pomegranates; a land of olive-trees and honey. Deuteronomy 8:8

The return of vineyards to Israel was specifically mentioned in the Prophets as a sign of the Messianic era. But they shall sit every man under his vine and under his fig-tree; and none shall make them afraid; for the mouth of Hashem of hosts hath spoken. Micah 4:4

The conference was not merely theoretical. Two vineyards were planted this year under the supervision of the Sanhedrin. On Sunday, the Sanhedrin will oversee the harvest of grapes from a vineyard in Kochav HaShachar. The harvest will be carried out with special attention paid to the laws of purity.

Another conference is being planned for the near future concerning the growing of Alpha olives to be used in the Temple.