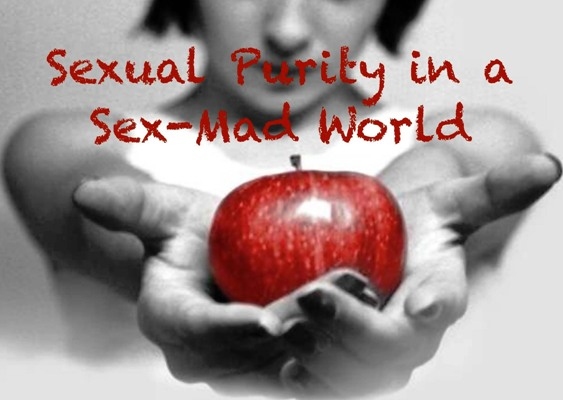 I’m going to ask you to imagine something so reprehensible that you may be inclined to stop reading this blog. But, please allow me to preempt that knee-jerk reaction by preparing you for it before it happens. I’m telling you, what I’m about to ask you to envision is something none of us are really prepared for, wholly; however, the exercise is a fruitful one. (Just because something is offensive doesn’t mean we are to turn a blind eye to it. Consider how awful the world must’ve been for Jesus in His incarnation, being perfect among a brood of vipers, lost souls, murderous fleshes, unholy activities, and a general population that rejected Him, as a person.)

Imagine that you lived while Jesus was walking this earth. At some point you joined His group and considered yourself one of His sheep, a disciple willing to follow Him. One day, when you’re feeling a bit rebellious, you handcuff Jesus to yourself, drag Him away from His ministry to others, force Him and a prostitute into the Temple, and have sex on the altar. As offensive as it is to Jesus, He is shackled to the situation because of you. I warned you, right? You might be asking, “Why in the world would a pastor ask me to envision such a scene?” The answer is quite simple.

Sexual sins invade the temple that is your body, defiling the very place where the triune God indwells a believer. This place is a holy place; therefore, any unholy intrusion is utterly grotesque. Do you agree?

Jesus cleared the way for us by removing the veil to the Holy of holies. We became the new temple of God. We ought never lose sight of this reality.

This hope we have as an anchor of the soul, a hope both sure and steadfast and one which enters within the veil, where Jesus has entered as a forerunner for us, having become a high priest forever according to the order of Melchizedek.  Hebrews 6:19-20

If you’ve read the Old Testament, you know how venerated the Jewish Temple was. And just think, it was made by human hands. Consider that God has made your body as the new temple for His presence. Consider how perfect His work is, and that He is willing to indwell said temple, personally. Now consider which scene is actually worse, the physical one I described at the outset of this article, or the spiritual violation that occurs every time you sin against your body, sexually. And you thought my “imagine this” scene was difficult to digest, huh?

The Bible describes sexual sin in a very unique way because for us believers in the Church, when we commit them, we involve Christ, the Messiah, Himself, with a harlot. The very last Person in human history that would ever involve themselves with sexual immorality is dragged into it by someone He laid His life down for, someone He purchased from spiritual death, someone He loved enough to save. The thought of it in plain language like this is nauseating, is it not? How could we ever treat our Lord this way…and yet, don’t we? While we can’t fester in condemnation over past sins, having been washed clean by the blood of Christ, we ought to wholeheartedly seek to understand the facts about sexual sins, not just for the sake of learning from our mistakes, but also for the sake of our future!

Flee immorality. Every other sin that a man commits is outside the body, but the immoral man sins against his own body. Or do you not know that your body is a temple of the Holy Spirit who is in you, whom you have from God, and that you are not your own?

For you have been bought with a price: therefore glorify God in your body. 1 Corinthians 6:13-20

I think it’s easy for some people to discard sexual sins because the world tells us they are a response to “natural feelings” and that abstinence is “unnatural” and therefore harmful. Such lies are so acceptable in our culture nowadays that we have to be extra careful to not allow our virtue to be diluted by them. The truth is that we profane Jesus Christ, personally, with sexual sins because at salvation we are made one with Him (Romans 6:3). For the sake of gravity, let’s remember that Jesus is perfect. Imagine now if someone you’re betrothed to decided to handcuff you, drag you into church, and have sex with another person while you remained present, by force. Why is it that this lesser scene is more visceral to us in some ways? Is it the physicality of it, or is it just that we don’t enjoy being the innocent party?

Am I trying to get some kind of emotional rise out of you? I suppose, to some degree I am, for that is often the one thing that can snap you out of a fog and rip you away from all the other emotional devices the kingdom of darkness has ensnared you with (May I suggest you have been a willing party all along? You have a free will, after all, right?). I don’t mind being the one having to bring up topics that make you uncomfortable (just imagine being the one tasked with writing this stuff).

I’ll close with the following thought: fornication, adultery, homosexuality, and beastiality are all specifically listed in Holy Scripture as sexual sins. Do not play games here, either, my friends, like President Bill Clinton did, claiming oral sex isn’t really sex. If you’re looking for excuses, you’ve already missed the mark, “For you have been bought with a price: therefore glorify God in your body” (1 Corinthians 6:20). I’ll take it one step further and say that anything of a sexual nature performed outside of marriage is a sin. This includes romantic kissing or touching. Sticking your tongue in another person’s mouth is, by definition, a form of intercourse. Too graphic? Too bad. I wish I didn’t have to write this stuff down, but apparently I do, given the lies people tell themselves. Would you kiss your grandmother that way? I didn’t think so. Guess what, anything of a sexual nature performed outside of marriage is a sin which drags Jesus Christ personally through the foulness of it. Stop it. Stop all of it, not just some of it!

One last thought for you to chew on. Why do you think just about every form of entertainment and commercialism is sexualized? Why do you think the world has normalized illicit sexual practices, encourages it, even (ala Romans 1:32)? What might be the easiest way to drive a splinter between a person and someone literally indwelling this person, considering the original two are already sharing intimacy through spiritual intercourse? What is the only sin mentioned in the Bible that is able to accomplish something so unholy as this between The Husband and His bride? Ask Satan, the genius behind the media…or look for him in the cheering section the next time you drag Jesus into the temple with one of Satan’s prostitutes.