Although state officials declined to give details about the investigation, employees at Planned Parenthood centers in Dallas, San Antonio, and Houston told the Austin-American Statesman investigators gave them 24 hours to turn over the data.

Planned Parenthood’s critics have long accused the abortion giant of illegally using state and federal funds to cover abortion costs. In 2013, Planned Parenthood Gulf Coast reached a settlement with then-Attorney General Greg Abbott over fraud allegations, paying Texas $1.3 million to keep the case from going to trial. As part of the settlement, the organization denied any wrongdoing.

But Abby Johnson a former Planned Parenthood clinic director turned pro-life activist, believes the organization has improperly billed the Texas Women’s Health Program as much as $5.7 million. She filed suit against her former employer over the fraud in 2012.

“I am confident that these investigators will find enough information to not only continue to defund Planned Parenthood in our state, but to also disqualify them from any future funding efforts,” Johnson told LifeSiteNews today. 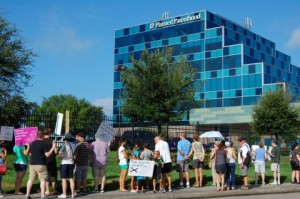 On Oct. 19, Texas announced it would remove Planned Parenthood from the state Medicaid reimbursement program, in part due to comments made by its executives on undercover videos shot by pro-life group Center for Medical Progress (CMP). The letter delivered to Planned Parenthood said it lacked the ability to ethically provide safe, competent, and legal services.

Abbott, now the state’s governor, said that Planned Parenthood’s “barbaric practice” of harvesting babies for research must end. CMP’s videos show Planned Parenthood abortionists talking about ways to get the best “specimens” and how much money each baby body part is worth. Selling fetal tissue is a felony. Planned Parenthood has claimed the money it gets only covers collection costs and does not make the organization any profit. But last week, Planned Parenthood President Cecile Richards announced it would stop taking payments and provide the tissue for free.

After the raids, a Planned Parenthood representative said state officials are just looking for an excuse to take healthcare away from men and women in Texas.