There have been 3 (yes three) verified cases of autism in the Amish, and two of those children were vaccinated. No information is available for the third child, who was likely vaccinated himself. The strong correlation between vaccinations and autism is becoming undeniable, unless you work for the medical establishment, the government, or mainstream media. Proponents of the status quo actually claim that the Amish must have a super gene that makes them immune to autism. They rationalize that autism must be some type of genetic failure, which attacks brains based on religious affiliations. It is truly the best of F.D.A. and A.M.A. science in all its shining glory. Vaccine proponents are willing to espouse 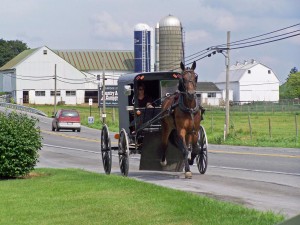 any ridiculous explanation, so long as they do not have to accept that their industry is causing chronic disease. Due to all their “help”, children in the United States have a stunning 2% chance of developing autism, and that percentage is growing rapidly.The uninitiated are often confused by the lack of autism in the Amish people. The Amish do not experience autism, or most of the other learning disabilities that plague our technological society. They live in a society that consists of outdated technologies and ideals, at least by contemporary standards. Their diet consists of eating organic, fresh, locally-grown produce, and of course, they do not follow the established vaccination routines. To the dismay of the mainstream media and the medical establishment, this has resulted in a healthier people, who are void of all of our chronic diseases. Heart disease, cancer, and diabetes are virtually non-existent in Amish villages. Equally non-existent are our modern, chemically-engineered medicines, enhanced (chemically engineered) foods, G.M.O. (genetically engineered) foods, and of course, vaccines. How is it that those who are without the so-called “miracles” of orthodox medicine are healthier? The truth about health, medicine, and how they both relate to the Amish has become an embarrassment to some rather powerful people.

The Amish are constantly harassed by health officials, who attempt to convince them to vaccinate their children. Whilst most Amish still refuse to vaccinate their children, a small minority are beginning to succumb to the scare tactics. This continues despite the fact that health officials actually have no legal right to visit people’s homes and harass them into accepting these poisons. As more of the Amish vaccinate, the autism rates in their community will rise. Fortunately, the majority of the Amish still contend that vaccinations are against God’s will, which interestingly enough, does indeed seem to be bringing about many health blessings.

Many of the viruses which children are vaccinated against are no longer circulating. However, fear tactics by the media have led frightened parents to vaccinate their children against these viruses anyway. One of those viruses is polio. The most recent case seen in the Western hemisphere was in Peru, in 1991. The World Health Organization (W.H.O.) declared the Western hemisphere free of Polio in 1994. Such inconvenient facts are not cited by the mainstream media, doctors, or the American Medical Association.

On October 14, 2005, the media swung into hysteria after the vaccine-strain of the polio virus was found in the stools of four Amish children. The media declined to mention that it was the chemically-inactivated version, which is only found inside the orally-given vaccine. This means that the source for the outbreak was the vaccine itself. The situation was sensationally exploited to terrorize parents who had been avoiding vaccines.

The spread of polio was fueled by the allopathic establishment’s across-the-board removal of tonsils, which is the only organ that produces polio antibodies. Around the same time, the newly-created F.D.A. began suppressing the use of silver in medicines, which was the only safe substance that was known to kill viruses (like polio). Finally, “the solution” that industry desired, namely a vaccine, was released at the time when the epidemic was naturally ending, so that the vaccine could be given credit. All of this was orchestrated to manipulate the masses into accepting vaccines, radiation, and chemistry for health.

“During the polio epidemics, it was found that people who had their tonsils removed were 3 – 5 times more likely to develop paralysis There were many at that time that suggested that polio was an iatrogenic disease [caused by the medical establishment]. We caused thousands of cases of paralysis. We did not cause the polio, but we converted people who would have recovered from a viral illness into people with a paralytic illness.”

With vaccinations, we are converting people who might have had natural immune-strengthening infections like the flu, or chickenpox into people who have life-changing disorders like autism. None of the Amish children who had polio in their stools experienced paralysis, or any other horrific symptoms. That fortunate conclusion is likely the result of them lacking the ‘miracles’ of allopathic medicine.

We must wonder how four Amish children who live in an isolated community managed to become exposed to the unique chemically-inactivated vaccine strain of the polio virus. It is more than likely that such a thing was intentional, especially when the harassment by local health officials is considered. In addition, the vaccine strain that was discovered had not been used for five years, due to the possibility of it causing paralysis. After all, if some Amish children were to get sickened by the polio virus, the Amish may all rush to get their children vaccinated, and the science of vaccinations is proven with a wink and a nod.

The manner in which this was reported is very telling. For instance, if the vaccine strain of the polio virus was found in a normal child, would the media have made the story into front page news? Would it even have been reported? The Washington Post explained that both state and federal officials had informed them of the story. Misleading titles such as, “Polio Outbreak Occurs Among Amish Families In Minnesota” were then used to manipulate resistant parents with bioterrorism.

When the Amish are simply left alone, to live free of chemical toxins found in our medicines and foods, they are not plagued with diseases, learning disabilities, or autism. They are categorically more intelligent, with the exception of advanced writing skills, which is explained by the fact that English is not their primary language. Could it be those same Amish “super genes” at work again? Society could learn greatly from their example, if we would only stop poisoning ourselves, and our children on a routine basis.

Pro-vaccination sources often claim that vaccinations are normal in the Amish community, and so is autism. These are lies. While there may be some small Amish groups which vaccinate, and thus have autism; neither is normal. The United Press, in conjunction with Generation Rescue, published a story about the rates of autism in an Amish community in Pennsylvania.

Reporter Dan Olmsted went searching for the autistic Amish. Statistically, there should have been about 130 Amish with autism in the community he examined. Dan discovered 3 cases. The first was an adopted Chinese girl, who had suffered through all of her vaccinations on the same day. The second developed symptoms within 24 hours after getting vaccinated, and there was no information about the third case. The reporter even spoke with the local allopathic doctor, who the Amish sometimes visit whenever herbs and supplements do not suffice (e.g. broken bones). The doctor admitted that he had never seen autism in the Amish community.

Dr. Max Wiznitzer of University Hospitals in Cleveland is an expert witness for the government, and he fights against families who file for compensation with the National Vaccine Injury Compensation Program. He made a mistake when he admitted that autism rates in the Amish community are somewhere around 1 in 10,000. The rate for the rest of us is currently about 1 in 50, and growing rapidly. The numbers are actually skewed against the Amish, since a tiny portion of their children are secretly being vaccinated now.

Studies which purportedly disprove the link between autism and vaccinations have all been funded by the pharmaceutical industry. No vaccine has ever undergone any independent, controlled, double-blind studies to determine safety and effectiveness. Seriously.

Philosophical and religious exemptions are available in almost every state. The only states that do not allow exemptions are West Virginia and Mississippi. In those two states, children are sometimes home schooled to avoid vaccinations. In the other 48 states, the public schools cannot legally turn people away if they submit exemption forms, so it is crucial that people learn their rights, and use them.

A public education is considered a basic human right in the United States and most of the Western world. Legal threats and court rulings have forced various school systems into funding home schooling with paid tutors or into allowing unvaccinated students admission. The usual excuse that is provided by the school systems for attempting to remove the educational right from unvaccinated children is that such children would somehow endanger the health of vaccinated children. Of course, no evidence is ever cited because there is none. Their hidden admission is that the vaccinated children have weakened immune systems; for there would be no danger to them if the vaccinations provided them with real protection. Why would the vaccinated children be at risk of dangerous diseases? There are already precedent setting cases that can be used against school boards and their representing attorneys. Most courts would view the ignoring of such precedents as a type of judicial contempt from the opposition, so arm yourself with the knowledge, and let them know that you know. You can beat them, even without an attorney. Hiring an attorney who is beholden to local politics and court protocols may actually hurt your chances of winning.