The Ark Encounter Will be Permanently Lit with Rainbow Lights

Answers in Genesis founder Ken Ham has announced the ministry’s Noah’s Ark-themed park will now be permanently lit up with rainbow lights as a reminder that God owns the rainbow – not the LGBT community.

On Facebook, Ham shared a photo of The Ark Encounter in Williamstown, Ky. lit up in red, orange, yellow, green, blue, indigo and violet.

“We now have new permanent rainbow lights at the Ark Encounter so all can see that it is God’s rainbow and He determines its meaning in Genesis 6,” Ham captioned the photo.

He explained that the rainbow is a reminder that “God will never again judge the wickedness of man with a global Flood – next time the world will be judged by fire.”

“The Ark is lit permanently at night with a rainbow to remind the world that God owns it and He decreed it’s a sign of His covenant with man after the Flood-Christians need to take back the rainbow as we do at the Ark Encounter,” Ham said.

As of Wednesday morning, Ham’s post received over 25,000 “likes” and hundreds of comments – most of them encouraging. “Love this. It’s time to take the rainbow back and celebrate its actual meaning,” wrote one woman.

“This is why I love the rainbow and chuckle whenever I see the LGBT crowd try and use it. I’m like ‘you do realize your sign has been around since the beginning of time and you’re actually sharing a promise from God right?'” wrote another. 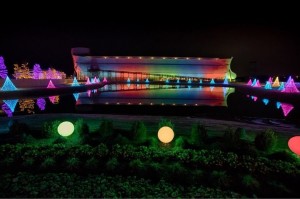 Ken Ham has announced The Ark Encounter will now be permanently lit up with rainbow lights as a reminder that God owns the rainbow – not the LGBT community.

“Wow, beautiful. So great to see the rainbow in its true context!” wrote another.

Others, however, weren’t so positive

“I think the symbol has already been lost,” wrote one commenter. “Might have been a good idea decades ago when homosexuality started claiming the symbol for their own, but it’s too late now. Christianity does not have the cultural power to reclaim it.”

“It’s an attitude like this that makes me embarrassed to even consider myself a Christian. A rainbow can represent many beautiful things. Free your mind and your heart will follow,” wrote another.

This is not the first time the Creation Museum president has urged the Christian community to “take back” the rainbow.

Over the holiday season last year, he bathed the life-sized Noah’s Ark replica in the colors commonly associated with the LGBT movement. On the ministry’s website, Ham explained that the rainbow “stands as a poignant reminder that God keeps His promises. Despite the wickedness in the world, God has not sent another global Flood to destroy all flesh.” Thus, it should not symbolize “freedom, love, pride or the LGBTQ movement,” but rather God’s covenant with Noah.

“Sadly, people ignore what God intended the rainbow to represent and proudly wave rainbow-colored flags in defiance of God’s command and design for marriage,” Ham wrote. “Because of this, many Christians shy away from using the rainbow colors…. As Christians, we need to take the rainbow back and teach our young people its true meaning.”

The Creationist last month told The Gospel Herald that issues surrounding gay and transgender rights have become “paw prints” in our nation – and that wasn’t the case ten years ago, signaling the increasing secularization of our culture.

“The chasm between what’s obviously Christian – what the Bible actually teaches – and what culture teaches has widened,” he said. “America used to be very christianized in its worldview as a culture. Now, there’s a big separation.”

Part of the problem lies with the Church, Ham said, as many pastors and religious leaders “water down” the truth of the gospel and compromise God’s word to “fit in” with culture.

“There’s a lot of pressure from this culture to support gay marriage and transgender issues,” he said. “So, when we stand on God’s word regarding these issues, we’re called unloving and judgmental. Sadly, what I’m finding is many churches and church leaders are succumbing to the pressure to condone homosexual behavior and gay marriage.”

He added, “We’re on the precipice of catastrophic change in this nation. In fact, I believe it’s already happening. Romans 1 talks about the wrath of God being revealed against unrighteousness, that God turns those who reject Him over to their depraved minds. I believe we’re seeing Romans 1 play out in our culture right before our eyes.”