The Book that Everyone Read During World War I

By Andrea Rhodes
SWINDON, England – 100 years ago, on 28 July 1914, the first shots of World War I were fired. Over the following four years, 16 million lives were lost as 65 million men from 32 countries were drawn into the conflict. The book that was read and cherished by people on both sides of the conflict was the Bible.

To commemorate the First World War centenary, Bible Society in England and Wales has been looking back at its records to trace the extent and impact of its Scripture distribution during the war years. What they have found is impressive: despite many logistical challenges, it distributed more than nine million Scriptures in 80 languages to members of the Armed Forces and prisoners of war on all sides.

But what brings the figures to life are the stories of how those Scriptures impacted the lives of people living through one of the darkest periods in recent history – and how they are treasured as family heirlooms today. Bible Society has shared some of those stories on its World War I microsite.

“There is no other book that was as widely owned or read in the trenches,” notes Dr Michael Snape, Reader in Religion, War and Society at the University of Birmingham in the UK. “There are poignant stories from the Battle of the Somme of bodies being recovered from shell holes of men who died with a New Testament in their hands.” 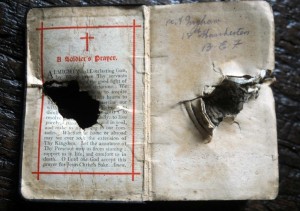 The Bible that Arthur Ingham carried in his chest pocket. It saved his life when a piece of shrapnel hit it. (Photo © Bible Society/Clare Kendall)

Arthur Ingham’s Bible, which he carried in the top pocket of his uniform, literally saved his life when it shielded him from a piece of shrapnel at the Somme.

“He said he would have definitely been killed were it not for this Bible,” says Philip Douetil, a family friend who now owns the shrapnel-damaged Bible. “He was a religious man after that. He wasn’t beforehand, but he became a regular churchgoer.”

For more stories, and to find out about – Hear My Cry – a special book to mark the World War I centenary, visit www.biblesociety.org.uk.