THOMSON, Ill. – A new children’s audio theater series is putting Christ back into history — and it’s getting lots of support from several well-known actors and actresses. 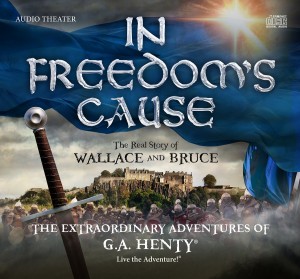 Heirloom Audio Productions just released its second CD, In Freedom’s Cause, which recounts the true story of 14th-century Scottish hero William Wallace, spotlighting his Christian faith in a way that Braveheart did not. The company’s first project, Under Drake’s Flag, highlighted the adventures and faith of Sir Francis Drake, the first Englishman to circle the globe.

They’re based on G.A. Henty books and made in the same genre as Adventures in Odyssey. In fact, some crew members from Adventures In Odyssey worked on the projects. Each episode is two hours and comes with curriculum.

In Freedom’s Cause stars Golden Globe winner Joanne Froggatt (Anna Bates of Downtown Abbey), Billy Boyd (Pippin of The Lord Of The Rings), Skandar Keynes (Edmund of The Chronicles of Narnia series), James Cosmo (Campbell, Father Christmas of Braveheart and The Chronicles of Narnia, respectively) and Brian Blessed (Boss Nass and Clayton in Star Wars: The Phantom Menace and Tarzan, respectively).

Executive producer Bill Heid said the projects have one goal: Tell how history’s heroes were driven by their Christian faith.

“Everything in our world is sort of sterilized and secularized, and the faith of the men has been taken out of textbooks in America and around the world,” Heid said. “These projects are all about putting Christ back into history.”

“[Wallace’s] faith was profound – so much so that when King Edwards’ men had him executed, his last request was to have the book of Psalms put in front of him so he could read it as he was being pulled apart,” Heid said. “That’s faith.”

They’ve been dubbed “audio movies” due to the many special effects and audio “layers.” In Freedom’s Cause and Under Drake’s Flag have been popular among homeschooling families, who view it as a new way to learn.

“We designed this to play in the theater of the child’s mind,” Heid said. “We think that creates a different type of experience for the listener. Children get 50-60 hours of screen time a week. We wanted to do something that activated a child’s imagination. It presents a whole new type of learning experience and educational experience.”