The Committee To Destroy The World: The Federal Reserve 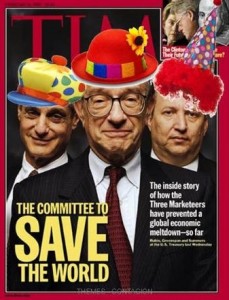 The general belief among average citizens is that the purpose of central banks is to help the economy by fighting inflation and mitigating financial crisis. It’s a fairy tale that politicians like to encourage. If there were any truth to it, however, where was the Federal Reserve during the crisis of 2007? Rather than helping, it was widening the crisis with its easy money policies.

The first central bank, the Central Bank of England, was created in the 17th century as a scheme to enable the king to pay off his debts. As each country established its own central bank, it has been used by its government as a personal bank account.

With the government’s permission, central banks print money for the use of commercial banks to lend out at a specified rate of interest. Together, they work at inflating the money supply through a system called fractional-reserve banking. Commercial banks are required to keep a fraction of their money in reserve. For example, if someone deposits $1,000, the bank has to keep 10 percent in its vaults. That $100 cannot be lent out. It can only lend out $900, thereby creating two separate claims on those funds: the original deposit of $1,000 and the subsequent borrower of the $900. The supply of money in circulation has been artificially increased to $1,900. That is only one of the ways central banks manipulate the fiat money supply.

This inflated money supply encourages consumers to spend and accumulate increasing debt which they will eventually find difficult to pay off, especially among those with a lesser income. As fiat money is circulated into an economy, the price of goods being purchased affects first the lower-income population and trickled slowing upward. The wealthier will retain spendable currency far longer than those at the bottom of the economic rung. As prices rise, the wealthy can still afford to purchase needed goods. The poorer segment of the population will end up being able to purchase far less than before. By this means, the central banks help create and maintain a separate class system.

During the financial crisis of 2007/8, central banks printed money to inflate the balance sheets of commercial banks at low-interest rates. The banks benefitted, while the increase in fiat money drove up consumer prices. At the same time, it increased the value of assets, such as stocks and real estate. These fortunate enough to hold stocks and real estate saw an increase in their assets. Those who attempted to purchase real estate or housing found the price out of their reach as their purchasing power diminished.

Central banks have never existed for the greater good. Their very purpose is to benefit the elite and those in power. Wealth inequality is a fact of life; however, the policies of central banks can exacerbate those inequities. The simple fact is people would be better off without the monetary manipulations of the central banks. The schemes of the central merely widen any income gap instead of closing it.

Thus far, President Trump has appointed Richard Clarida, a moderate Republican, and director at Pacific Investment Management Co., to serve as deputy chairman under Chairman Jerome Powell. Trump’s second appointee is Michelle Bowman, who has served as banking commissioner for the State of Kansas. Both nominees have a long history of dealing with the Federal Reserve and are likely to maintain the status quo of easy credit than challenging it.

Wall Street has enthusiastically embraced these Federal Reserve nominees. That is not surprising since they appear predisposed to continue the influx of fiat money and keeping interests artificially low. Commercial banks will remain the primary beneficiary of this policy. This same policy will keep corporate borrowing easy and attractive as companies accumulate an unsustainable level of debt. While large corporations continue to speculate with easy credit, the rest of the population should be wary of the consequences.

The Lehman Bros. crash of 2008 may have disappeared from the rearview mirror when the Federal Reserve spent $16 trillion to bail out struggling financial institutions. The same situation could recur if the mega banks experience another collapse when their borrowers are unable to repay those easy loans. For this reason, President Trump’s appointments to the Federal Reserve Bank are critical and potentially disastrous.

Despite Trump’s tough rhetoric, he has embraced the easy fiat money policy of the past. He has appointedSteve Mnuchin, a former partner at Goldman Sachs, as Treasury secretary.

During the first half of 2018, the economy has been booming and consumer confidence has been strong. But that was the situation in 2007 when an economic collapse seemed unimaginable. Unfortunately, the U.S. national debt has now exceeded $23 trillion. Thanks to easy credit, consumer debt is expected to reach $4 trillion by the end of the year.

At this time, central banks have free reign over the economy. They can, in effect, do whatever they want. This unlimited power could be checked with the reinstitution of the gold standard, which would place the value of the currency at market value instead of artificial central bank whim. To quote economist Murray Rothbard, “[A]bolish the Federal Reserve System, and return to the gold standard, to a monetary system where a market-produced metal, such as gold, serves as the standard money, and not paper tickets printed by the Federal Reserve.”

In a system of gold-backed currency, prices and availability of goods would still fluctuate, but they would be subject to economic circumstances instead of political caprice. And the fluctuation would be significantly less.

President Trump’s Federal Reserve appointees are continuing the mistakes of the past. While all are cheering the economic boom, everyone is averting their eyes from the burgeoning debts that may soon come crashing down. And if it does come crashing, it will create a global chaos the world has not previously experienced.