The Cost of our Silence, examines the Consequences of Taking the Path of Least Resistance 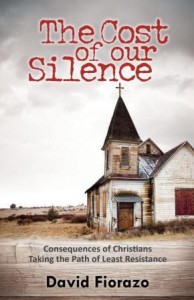 MINNEAPOLIS, MN (ANS) – David Fiorazo is an author, writer, content contributor, public speaker, and radio personality who loves God and country. He has been involved in the broadcasting and entertainment industries for over thirty years and in Christian ministry for over twenty five years. Fiorazo loves the Word of God, and strives to defend and proclaim the truth of Jesus Christ without apology or compromise.

Fiorazo grew up in a small town in the Upper Peninsula of Michigan, toured the United States as a drummer in Christian bands in the 1980’s, moved to California, worked in radio, managed restaurants, and trained professionally as an actor in Hollywood and Los Angeles. He worked in commercials and various television shows including small roles on General Hospital, The Young and the Restless, and Golden Girls. David starred in an independent film in 2003, premiering at Disney Studios in Burbank, CA, and began writing and disciplined Bible study.

Although he attended church with his family in those early years, he admits struggling with a short attention span — and going through the motions. Through deaths in his family and the school of hard knocks, David finally turned to God.

As a member of Christian bands, Fiorazo got to travel across the country. He noticed a lack of understanding of, and passion for, God as well as a culture bent on entertainment, and became concerned about fading family values in America. What he observed was — and is — a culture in obvious moral decline; but few were speaking up! More concerning was the growing complacency among Christians and the lack of salt and light in society.

Chasing the acting bug in the 1990s and working in both Christian radio and in Hollywood, Fiorazo had one of his bigger roles on General Hospital the same year he realized God was calling him and his wife, Rosanna, to the Midwest. After realizing how committed atheists and leftists are to their cause, he became more involved in the cultural and political battles.

David states: “I wasted many years on selfish pursuits and lukewarm Christianity. Since I’ve recommitted to live as fully as possible for Christ, it’s easy to see the Church in desperate need of restoration and revival. How can we remain neutral? “I am passionate about truth and am convinced America would be much better off if we lived what we profess to believe, and if we shared the gospel without compromise.”

Tired of living with one foot in the faith and another foot in the world, Fiorazo decided to stop being a lukewarm, hypocritical Christian and press on toward the goal to reach people for Jesus Christ. In his own words, David is no longer merely a “professing” believer.

He says: “It is impossible to be a part-time Christian.”

One catalyst that led him to start blogging and writing was what David calls, “the most corrupt, one-sided media in American history that refuses to report the truth.” Christians were buying the media’s bias. Because of his love for the Lord, for old-school journalism, and his desire to raise awareness, David was compelled to get out of his comfort zone and take action by writing, speaking, and encouraging others.

Then, upon seeing how liberalism is infecting Christian churches, and more believers falling for the watered-down teachings of emergent church leaders, he decided to work to help inform and encourage believers to repent, grow in the Word of God, and speak the truth in love.

The message is not a popular one, but David Fiorazo is undaunted to do his best to fight the good fight of faith and be a watchman on the wall for those willing to listen. He would love to make more disciples and culture warriors for Christ!

To learn more about “The Cost of our Silence,” or to order a copy visit anekopress.com.