The Dark Side of iPads Coming to Light

An alarming trend is coming to light as psychologists and counselors see more and more young people addicted to the Internet and portable electronic devices.

The “floodgates of desperate youngsters” opened in 2010, said child psychotherapist Julie Lynn Evans in an interview with Britain’s Telegraph. “I saw my work increase by a mad amount and so did others I work with. Suddenly everything got much more dangerous, much more immediate, much more painful.”

Official figures confirm the picture she paints, with emergency admissions to child psychiatric wards doubling in four years, and those young adults hospitalized for self-harm up by 70 percent in a decade.

“Something is clearly happening,” says Evans, “because I am seeing the evidence in the numbers of depressive, anorexic, cutting children who come to see me. And it always has something to do with the computer, the Internet and the smartphone.”

Hard on the heels of Evans’ interview comes the story of a 12-year-old Colorado girl who twice tried to poison her mother with bleach after her mother took away the girl’s iPhone. The preteen was detained at the Boulder County Juvenile Center on two counts of attempted first-degree murder.

Children’s dependency and addiction to electronics have been worrying child-development specialists for years. Evidence is mounting that heavy use of iPads for toddlers interferes with play and cognitive development. Young children cannot use such basic toys as building blocks because they have not developed the necessary motor skills.

“Rising numbers of infants lack the motor skills needed to play with building blocks because of an ‘addiction’ to tablet computers and smartphones, according to teachers,” reports a Telegraph article. “Many children aged just three or four can ‘swipe a screen’ but have little or no dexterity in their fingers after spending hours glued to iPads.” 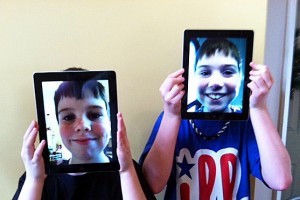 Older children are also reportedly having trouble with traditional pen-and-paper exams because they are unable to properly hold a writing instrument and “because their memory had been eroded by overexposure to screen-based technology.”

iPads seem to be particularly seductive to youngsters, with its bright colors and infinite variety of games and pictures. Because using it is so easy – a swiping movement is all that’s required – simple skills of even how to turn a page are often not acquired until children are much older.

Younger and younger kids are even receiving therapy for electronics addition. Preschoolers who are abruptly deprived of their iPads or smart phones exhibit tantrums, agitation and even depressive symptoms. Because the devices are often given to children as pacifiers, youngsters may not develop critical social or relationship skills. There is also the question of whether parents develop necessary social and emotional ties with their children by plugging the children into electronic devices rather than coping with normal childish stages and emotions.

“Perhaps this all begins with mimicry,” writes Chris Matyszczyk on CNET. “The children see their parents’ deep involvement in their machines and want to do the same.”

Evidence is emerging that even adults are forgetting certain motor skills, such as writing. Keyboard use has become so heavy with tech-savvy people that writing by hand gets pushed aside. Known as “character amnesia,” it’s becoming endemic in Asian countries where traditional writing skills are being lost to keypad savvy.

“Chinese schoolchildren grow up memorizing well over 3,000 different characters,” reports Breaking News English. “However, the study shows they rarely need to write them by hand and are forgetting their shape. Instead, young people are using their phones and computers to write. … University student Li Hanwei, 21, said: ‘I can remember the shape, but I can’t remember the strokes that you need to write it … It’s a bit of a problem.’”

There are accompanying declines in the quality of handwriting and spelling, since more and more people rely on “text chat.”

Yet multiple studies suggest handwriting is “important for brain development and cognition – helping kids hone fine motor skills and learn to express and generate ideas,” notes the Week. “Yet the time devoted to teaching penmanship in most grade schools has shrunk to just one hour a week.”

Long-term repercussions of electronic usage remain to be seen.