The Deliberate Dumbing Down Of America 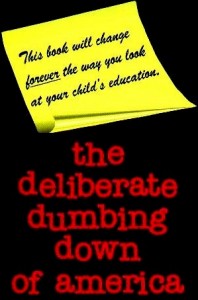 This book will change forever the way you look at your child’s education. Iserbyt has directed her flashlight into the darkest, secret, elitist corners of academe, flushing out and exposing to the light of day the termites who have been eating away at the foundations of traditional academic education.

Charlotte Iserbyt is to be greatly commended for having put together the most formidable and practical compilation of documentation describing the “deliberate dumbing down” of American children by their education system.

Anyone interested in the truth will be shocked by the way American social engineers have systematically gone about destroying the intellect of millions of American children for the purpose of leading the American people into a socialist world government controlled by behavioral and social scientists.

This book should be in every parent’s hands who’s considering sending their precious child to the public education system.