The Gospel Spreads From Caesarea To Rome

The beginning of our story as gentiles 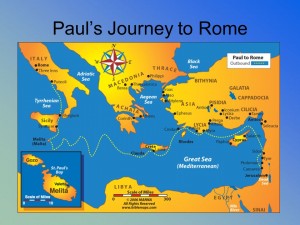 The ancient city of Caesarea Maritima nestled along the Mediterranean coast was one of the most significant seaports in the world during the time of Herod the Great and the events of the book of Acts. Named “Caesarea” in honor of Caesar Augustus, this urban center was a hub of commercial importance known for wine, olives, oil, fruit syrups, and nails. It was a city of splendor—white limestone was its principal building material. Mosaic sidewalks with long rows of pink granite and marble columns led from the city center to a distinguished amphitheater. Thousands more columns stood in parallel rows along the streets.

Today, Caesarea is also known for the remains of a ten-mile-long Roman aqueduct which runs along the beach to the north of the city, just as it did in the first century—reflecting the architectural genius of Herod the Great. This aqueduct supplied the city’s drinking water, as well as water for public baths. The restored Roman amphitheater is used today for concerts and the remains of Herod’s hippodrome and palace, or the “praetorium,” are viewed by tourists.

It was in this praetorium in Caesarea that the apostle Paul was kept a prisoner for two years. It is also from here that Paul took the gospel to the heart of the Roman world—first through the Roman rulers he met with in Caesarea, and then in Rome itself.

Prison Was His Pulpit

In the fall of AD 57, Paul was being attacked by an angry mob outside of the temple in Jerusalem when the Romans took him into protective custody and then sent him to Caesarea to await trial. Felix, the Roman governor, heard Paul’s case and delayed his decision—but a few days later brought his Jewish wife, Drusilla, to hear the curious prisoner. Paul proceeded to preach to the two about the righteousness of Christ, self-control, and judgment to come. Felix responded to the gospel in fear, deferred his verdict, and put Paul in prison. However, he often brought Paul before him so they could speak further.

After two years, Festus succeeded Felix as governor and called for Paul to appear before him. When Festus suggested that perhaps he should be taken to his accusers in Jerusalem, Paul exercised his right as a Roman citizen and appealed his case to Caesar (Acts 25:11–12). Festus was left puzzled by this, because he knew Paul was innocent. But this would be the way Paul would take the gospel to Rome as the Lord had told him he would.

Festus then brought Paul before King Agrippa and his wife Bernice, who happened to be visiting Caesarea. According to Festus, Paul wouldn’t stop talking about the death and resurrection of Jesus; this intrigued Agrippa, who said, “I also would like to hear the man myself” (Acts 25:22).

The next day, in the auditorium in the city of Caesarea, Paul once again embraced the opportunity to preach the gospel to not only Festus, Agrippa, and Bernice, but to the commanders of the Roman Legion, and all the prominent men of Caesarea (Acts 25:23).

In front of these rulers and dignitaries Paul declared: “I stand, witnessing … That the Christ would suffer, that He would be the first to rise from the dead, and would proclaim light to the Jewish people and to the Gentiles” (Acts 26:22–23).

The Gospel Goes to Rome

Once in Rome, Paul presented his case to the Jewish leaders who announced they had heard nothing bad about Paul from the Jews in Judea. Growing numbers of Jews assembled to hear Paul teach about the kingdom of God and preach from the Law of Moses and the prophets, “persuading them concerning Jesus” (Acts 28:23).

During this two-year period, Paul—a Roman citizen—lived in his own rented house under guard. He “received all who came to him, preaching the kingdom of God and teaching the things which concern the Lord Jesus Christ” with boldness and without hindrance (Acts 28:30–31). It was from there that he wrote his letters to the Ephesians, Philippians, and Colossians.

Though Luke leaves readers hanging (we aren’t told if Paul ever went before Caesar in Rome), Paul’s letter to the Philippians reveals he became known throughout the whole palace guard, a body of 10,000 elite soldiers in Rome. His influence went beyond this group “and to all the rest” (Philippians 1:13) which suggests Paul was well-known throughout the entire city. There is even reference in Philippians 4:22 to “saints” in Caesar’s household.

Paul did not allow house arrest or even prison to stop him but taught and preached to anyone who would listen. In this way, the gospel spread not only to the Jewish community in Rome but even to the household of the Roman Emperor—the result of a providential two-year hold in a prison cell in Caesarea and a bold request to come before Caesar in Rome.