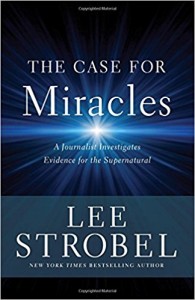 (Rochester, MN) – Author and evangelist Lee Strobel was once an atheist who served as the legal affairs editor for the Chicago Tribune before embarking on a quest to try and disprove Christianity—an effort that ironically led him to embrace faith.

Now, Strobel, whose personal story was told through the Pure Flix feature film, book and documentary titled “The Case for Christ,” has released, “The Case for Miracles,” a new investigative book that relies on facts, interviews and studies to further explore spiritual matters.

“It was really the miracle of the resurrection and the historical evidence for that that ended up bringing me to faith many years ago,” Strobel told Pure Flix Insider and The Billy Hallowell Podcast. “But my skepticism didn’t go away.”

Strobel said that he has long believed that Jesus performed the miracles described in the Gospels. That said, before writing “The Case for Miracles,” Strobel was “ambivalent” about whether these miracles still happen today. Adding to that, he had some skepticism about some of the charlatans who have been exposed for making false claims about healings and the like.

“You just wonder … how legitimate are these miracle claims in the 21st century?” Strobel said. “And so that’s kind of what prompted me to investigate this issue.”

He encountered scores of healings and other claims of the miraculous along the way, but there was one case in particular that truly blew his mind: the case of Barbara Snyder.

Synder’s miraculous healing, which unfolded more than 30 years ago, was apparently so shocking that even her doctors have written about her seemingly impossible medical turnaround.

“Barbara Snyder was diagnosed at the Mayo Clinic with multiple sclerosis. She deteriorated over a period of many years, several operations, many hospitalizations,” Strobel explained. “It got to the point where she was dying. And, in fact, one doctor described her as being one of the most hopelessly ill patients he’d ever encountered.”

Snyder ended up in hospice care with a no-resuscitation order; she was nearly blind, her hands and body were curled and she had a tube in her throat to help her breath as well as a tube in her stomach to ensure proper nourishment. Meanwhile, her muscles were atrophied.

The situation was pretty hopeless—until something quite shocking happened.

“One day, one of her friends called WMBI, which is the radio station in Chicago run by the Moody Bible Institute, and said, ‘Pray for Barbara. She’s on her deathbed,'” Strobel explained. “So, we know that at least 450 Christians began praying for her, because they wrote letters saying, ‘We’re praying for you.'”

Then, on Pentecost Sunday, two of Synder’s friends read her letters from those praying for her. As she listened, she said that she heard a male voice coming from the corner of the room—a voice she now believes was God.

“This male voice coming from the corner of the room where nobody was said, ‘Get up, My child, and walk,'” Strobel recounted. “So she basically pulls the tube out of her throat, says, ‘Go find my parents’ [and] jumps out of bed.”

Bizarrely, her calves were inflated and her once-atrophied muscles worked again—and that’s not all. Her feet and fingers were suddenly straight and normal again. Her blindness, too, had been instantaneously healed.

“This was an instantaneous healing of all of her symptoms and all of her illness to the point where … 31 years later she’s completely healthy,” Strobel said. “To this day.”

There were plenty of other stories just like it, too.

Strobel went on to explain that he interviewed skeptics and Believers, alike, and included their perspectives in “The Case for Miracles.” At the end of the project, Strobel said he was shocked to learn that miracles are not only common, but also well-documented.

Likewise, Americans are quite prone to believing in the potential occurrence of miracles.

“Only 15 percent, according to the polling that I did, believe that miracles cannot happen today,” Strobel said.