Jesus Film Project® announced yesterday during the annual National Religious Broadcasters Convention the completion of its 1,500th language translation of The Jesus Film, the most watched film in history according to “The Guinness Book of World Records.” The 1,500th language, Daasanach, belongs to an ethnic group inhabiting parts of Ethiopia, Kenya, and Sudan.

Since 1979, Jesus Film Project’s resources and strategies have been utilized in 7.5 billion gospel presentations in more than 230 countries, and for many individuals in remote areas around the world, “JESUS” is the first motion picture they have ever viewed. The powerful impact of seeing the story of Jesus’ life, death and resurrection in their heart language has resulted in more than 490 million indicated decisions for Christ following a film showing. 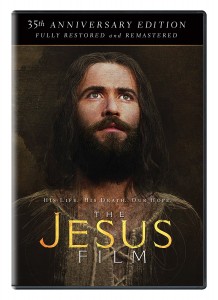 Those lives changed reflect Jesus Film Project’s dedication to spreading the gospel not only through its own direct outreach but also through partnerships with hundreds of ministries and churches that have utilized Jesus Film Project tools; including an app, bible studies, additional films and other tools.

“The completion of the 1,500th language translation of ‘JESUS’ is an incredible milestone,” said Josh Newell, Jesus Film Project’s Director of Marketing and Communications. “This marks a critical advancement in reaching those who have never heard the gospel. ‘JESUS’ has long been one of the most effective ways to reach people in a way they can immediately understand the message of salvation, and now our reach can go even further.”

This translation is another step in reaching the unreached people groups as part of Jesus Film Project’s Mission 865, an initiative to reach the remaining 865 language groups in the world with 50,000 speakers or more representing roughly 323 million people who have not heard the Gospel of Jesus. Mission 865 represents Jesus Film Project’s commitment to reach these groups with Jesus’ story in their language by 2025.

“While the Gospel has gone to every modern country in the world; when Jesus commanded his followers to ‘make disciples of all the nations’ in Matthew 28:18-20, he was not referring to modern nations. Countries that exist today did not exist when Jesus gave the command,” stated Newell. “In the Great Commission, Jesus commanded his followers to make disciples from every ethnic people group which is why achievements such as the 1,500th language translation of ‘JESUS’ makes such a broad impact on this mission.”