The Liberty Bell got its name from being rung JULY 8, 1776, to call the citizens of Philadelphia together to hear the Declaration of Independence read out loud for the first time. 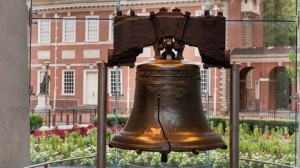 Made in England in 1752, this massive bell, weighing over 2000 pounds, was rung on each anniversary, until JULY 8, 1835, when it cracked tolling at the funeral of the famous Supreme Court Justice John Marshall.

Inscribed on the Liberty Bell is a verse from the Old Testament Book of Leviticus, chapter 25, verse 10: “Proclaim Liberty throughout the land unto all the inhabitants thereof.”

At the 150th anniversary of the Declaration, 1926, President Calvin Coolidge stated: “People at home and abroad consider Independence Hall as hallowed ground and revere the Liberty Bell as a sacred relic. That pile of bricks and mortar, that mass of metal, might appear as only the outgrown meeting place and the shattered bell…but to those who know, they have become consecrated. They are the framework of a spiritual event.”