The Long Wait is Over: Saeed Abedini is back on US soil 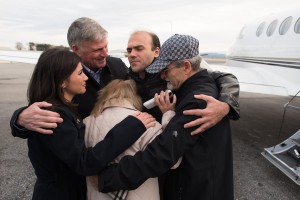 NORTH CAROLINA (ANS) – The long wait is finally over for Saeed Abedini, the 35-year-old American pastor imprisoned in Iran, when the plane he was traveling in, touched down on US soil today (January 22, 2016) at a North Carolina airport, and he was able to wrap his arms around his parents and sister.

A huge smile spread across Abedini’s when he deplaned and was warmly greeted by his family, and also Franklin Graham, son of evangelist, Billy Graham, after spending more than three traumatic years in jail in Iran for his Christian faith.

Iran-born Abedini, who converted from Islam to Christianity, had traveled to Iran in 2012 on a mission to build an orphanage. But he was detained in July 2012 on charges of evangelizing and sentenced to eight years in prison. The judge said Abedini’s activities were “threatening the national security of Iran.”

Abedini was freed from the Iranian prison along with three other Americans last week. The release was part of a prisoner exchange between the United States and Iran.

“Pastor Saeed Abedini is safely back and will be a guest at the Billy Graham Training Center at The Cove [the 1,200-acre retreat center in the N.C. mountains] in Asheville, North Carolina, as he reacclimates and spends time with his family,” Graham shared on Facebook today.

In a statement, Franklin Graham, who is also CEO of the Billy Graham Evangelistic Association (BGEA), which operates the Asheville center, said that “we want to provide him a quiet place to rest and visit with family.”

Franklin, who played a leading role in the campaign by evangelical Christians to press for Abedini’s release, added: “None of us in America can begin to understand or appreciate what Saeed has endured after being imprisoned in Iran because of his Christian faith.”

CBN News reported that Saeed’s attorneys said the charge also stemmed from his prior involvement with Christian house churches in Iran. “During his imprisonment… he was beaten, threatened, suffered internal injuries, denied medical treatment and was separated from his wife and two children,” added CBN News.

His wife, Naghmeh, 38, who fought tireless for him, has announced that she and their two children, Jacob and Rebekka, will be joining him at the The Cove on Monday (January 25, 2016).

Naghmeh has been open about marital troubles that she and Saeed had experienced over the years. Because of those issues, along with his need to recover from years of mental and physical trauma in a harsh Iranian prison, she said they will need much time to heal.

“Please pray for us as we will be spending weeks or possibly months healing as a family and going through counseling. I am thankful for Franklin Graham for coming along side our family through these next steps of the difficult journey ahead,” she said.

“I am believing in a miracle for our marriage. We need your prayers more than ever. The enemy wants to bring division and destruction. Please pray that we can heal and move forward united as a family,” Naghmeh continued.

Meanwhile, Saeed has been speaking out about what it’s been like for him to finally be free. Jay Sekulow, with the American Center for Law and Justice (ACLJ), spoke by phone with Abedini while he was receiving medical treatment at a US military hospital in Germany.