THE NEW BABYLON: THOSE WHO REIGN SUPREME

The Rothschild Empire: The Modern-Day Pharisees and the Historical, Religious and Economic Origins of The New World Order 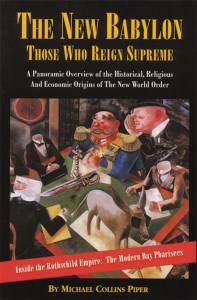 While there is much discussion today about a concept known as “The New World Order,” the pathetic fact remains that most of those doing the talking about the New World Order refuse—and adamantly so—to address its real origins, its real nature.

Over the years there has been quite a bit of material published that points in the direction of what the New World Order constitutes and it is the purpose of this volume to assimilate and assemble that material which correctly describes the New World Order and the philosophy upon which it is founded.

There is an extraordinary amount of mis-information and deliberate dis-information about the New World Order that is floating about today, much of it on the ever-increasingly-influential Internet.

Unfortunately, much of this thoroughly fallacious material is being promulgated by self-styled “patriots” who ignore or suppress the uncomfortable, cold, hard truth that the origins of the New World Order are found in the series of Jewish religious commentaries known as the Talmud, an often, vile occult work that is the basis of Jewish religious thinking today, just as it was when it first emerged during the Jewish “captivity” in Babylon.

World conquest is the ultimate aim. Our America, the blood of its young people and our national treasure, are being used to advance that agenda through imperial wars that have ushered in an era in which mankind could face a nuclear Holocaust.

Its proponents have very real faces and names. These modern-day Pharisees are not hidden behind obscure, impossible-to-pinpoint entities such as “The Illuminati” or a “German death cult” as some would have us believe.

The New World Order forces have coalesced around the international empire of the Rothschild Dynasty whose tentacles now reach into the highest levels of the American system. The New World Order is real and this is what it is all about.

I am personally indebted to all those who came before me in exploring this troublesome topic in no uncertain terms. I hope I have done their work justice in mine. – MICHAEL COLLINS PIPER