The Promise and Dangers of New Technology: Behind the Scenes of TRANSCENDENCE with Johnny Depp 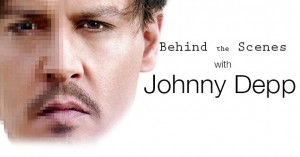 Ever notice how annoying people are getting with their connections to computers? Everywhere you turn, people have Bluetooths that attach to their ears or Google Glass devices that provide an instant video stream of what our eyes see to the World Wide Web. At what point, do we have to stop and say, “Enough’s enough?”

The new movie TRANSCENDENCE takes a powerful look at that dilemma, serving up frightening questions through the context of a thriller about a scientist named Dr. Will Caster, who is at the forefront of research into artificial intelligence (otherwise known as A.I.). As played by Johnny Depp in a rare role that doesn’t require absurd costumes or makeup, Caster seems to be a nice enough guy who just wants to continue mankind’s progress towards ever-greater scientific accomplishments.

However, there are protesters who fear that A.I. will enable computers to someday surpass the human mind and take control over their human masters. So, Caster finds himself shot by a radioactive bullet that will kill him over the course of a mere month. As he wastes away, leaving his wife and research partner to grieve and wonder what might have been both in their marriage and their life’s work, Caster suddenly arrives at a drastic idea.

He wants to see if he can upload his own mental and spiritual consciousness into the giant computer system that drives his work, just as he had managed to upload a monkey’s consciousness into earlier research. Figuring he has nothing left to lose, Caster attempts the experiment and finds that it succeeds. However, this creates a whole new set of problems when he realizes that his brilliant mind can now be immortalized. That sense of power sets him off on a dangerous path in which he tries to place whatever is good for himself ahead of what’s good for everyone in society.

Thus, TRANSCENDENCE sets a powerful string of moral quandaries presented to viewers. Could they manage to use the same powers for definite good, or would the temptation for greed, selfishness, and other forms of evil take over?

“I thought there was something beautiful to the idea of the film,” said the movie’s star, Johnny Depp, who recently appeared at a press junket for the movie that Movieguide® attended.

“I thought there was something very beautiful to [director Wally Pfister’s] idea, a certain disintegration to the character and watching him go out. There’s a progression to him being uploaded to the computer, and then once inside, he could become anything.”

At first, Will appears younger when his face appears onscreen to talk with his wife and other partners, as a measure of the perfect man he appears to become through his moment of transcendence. As anyone who follows the evolution of A.I. in the real world fears, such a moment could also lead to very dangerous consequences for mankind.

“[Director Wally Pfister] has spoken to a lot of high up scientists and scholars, so knowing that a great bit of the tech is active, actually happening, and the tech we’re talking about uploading the human consciousness to is probably not that far away,” Depp noted. “They’re all agreed about it happening, just a matter of when. A Caltech expert told me 30 years.

“It was terrifying to learn that scientists we spoke with felt that what we’re heading towards a crash with technology and that the next phase of our evolution will involve machines,” Depp added. “The questions I asked professors was, if we were able to take consciousness and the mind and transfer, would it include our emotions? They said yes, but whoever is doing the hard drive will have some effect on what carries over. It opens up a lot of fascinating questions.”

Interestingly, Depp doesn’t consider himself a tech wizard at all.

“Things go wrong all the time, especially between me and technology,” Depp said. “I’m too old school a brain to figure it out. Anything I have to attack with my thumbs for any period of time makes me feel stupid, so I try to avoid it as much as possible.”

One other aspect of Depp’s experience with TRANSCENDENCE also blew his mind. A recent trip to promote the movie in China gave him his first glimpse behind that most complex and contradictory of nations, giving him both good and bad things to mull over.

“It was amazing on a cultural level, with just constant information, with something new everywhere you looked, something interesting,” he said. “I found a real warmth in the people and quite a turnout wherever we went, but there were also a lot of strange things that went down that I’d rather not talk about because I value my life.

“But the strangest thing, amid all the foreign culture I’m being enlightened by, four little Chinese boys dressed in priest outfits come out on stage at an event,” Depp said. “Transcendence comes out written on their heads in four Chinese characters, they shaved one of them each onto the little boys’ heads and brought them onstage with me. Little boys brought on stage with the name of a movie shaved into their heads – yeah, it scared me a little.”

Depp also spoke at length about his next big role, portraying the colorful real-world mobster Whitey Bulger, who recently was arrested and convicted for an array of crimes, including murder, after decades on the lam. That role would represent another distinct turn away from the characters like Captain Jack Sparrow and Tonto whom he has relied on playing for the past decade, and towards a more mature style that perhaps reflects Depp turning 50 and becoming newly engaged to actress Amber Heard.

“There’s actually a lot of parallels between Whitey and Will Caster, because it’s about how people think they have the power to do anything,” Depp said. “It should be a little vague – is he losing it? You could make an analogy to a security guard who three weeks before was mowing lawns for a living but as soon as he puts a uniform on he’s the overzealous guard.

“Is there something lying dormant in the man? Does it appeal to him? Does it change him? You don’t know,” Depp said wryly. “Once Will’s in the computer, as he’s growing at a rapid pace – does any bad person think they’re doing bad? Historically most think they’re ok, but of course a few were off. By a lot! So when Will was dedicated to the cause and the feeling that he was God. Nothing on earth is more powerful than you.”

Just as Christian leaders and other moral and ethical teachers around the globe have had to reformulate their decisions on what constitutes a just war in an age of carpet-bombing possibilities, or what constitutes extraordinary care in an age when machines can take on more and more survival functions for people, these questions of computer power and where it is leading mankind will present many dilemmas in the coming years.

Ultimately, TRANSCENDENCE is just a thriller, albeit a thought-provoking one. Depp and his director, Wally Pfister, are not required to lead viewers to a definitive answer, just to open the door of possibilities and ask viewers to think long and hard about the road we are on in human society, and to remember to not lose sight of moral truths and biblical principles in the pursuit of faster, better, stronger modern comforts.

“We’re hoping to create ambiguity in this film,” Depp concluded. “If you’re able to do this [upload a dying person’s mind and emotions into a computer], is this the fair and right way to do it? Technology is reshaping itself radically every day. If you’re in that situation with a split second decision of promise to save [people], this movie asks would you do it, or is it too big a risk?”

TRANSCENDENCE opens nationwide Friday. Before you pay your money, please check out Movieguide®’s review of the movie here.