The Real Problem With The NFL

Go ahead and put on your flack jacket and your helmet. I’m a straight shooter and I am about to shoot. I make no apologies, and I offer no qualifiers for what I am about to say.

I love women and children no matter their race, ethnicity, gender identity, or political persuasion, and I oppose all forms of abuse.

Stop trying to tell me what to think. Perhaps things would be better in America if more people took the time to think rather than repeating the drivel some talking head regurgitated into their brain.

Today, my target for truth is the NFL…or rather their reaction to “public pressure” put on them by the gaggle of non-thinking leftists that make up the “media”.

Can we get back to some football, please? Will the football announcers stop talking about child abuse and wife-beating as if they were conducting their own version of sensitivity training? I tune in to watch Cris Carter analyze football, not child discipline. And please put Hannah Storm on The View where she belongs; far away from analyzing a man’s game.

Get the women the hell out of the locker room and away from sports. Hannah Storm has never strapped on a helmet and taken on a snot-snorting linebacker. Until she does, I want neither she nor her friends in empty-skirts explaining a man’s game to me.

I know you’re uncomfortable right now, because you never hear men speak straight like this anymore, do you? Relax. You’ll feel better when I am done…especially if you are a man. 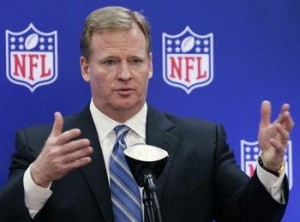 I’m going to lay out a few principles; most without comment. Someone please forward it to the sissy lawyers running the NFL office, and please tell Roger Goodell to man-up and stop acting like his wife, former Fox info-babe Jane Skinner. If some man doesn’t stand up soon, there won’t be any NFL football worth watching.

I’m just going to run down my list of questions and suggestions, and I couldn’t care less what some feminist majority or feminine ass-kisser thinks about it. Here goes…

I thought women and men were equal. Isn’t that what they tell us when they let women in the armed services, join the fire-fighters, or become a local police officer? Women are just as qualified as men, they tell me, and should not be discriminated against just because they are women. Ok.

If women are just as qualified as men, then why have the physical tests been altered to make it easier for a woman to pass these tests? Why can’t men play in the Woman’s NBA? Where is the male host on The View?

Didn’t Ray Rice’s wife (girlfriend at that time), engage in domestic violence towards Mr. Rice? Wasn’t she seen slapping him? Was she charged in the incident? Did she lose her job? Did Hannah Storm talk about how outrageous her physical violence was? Does the NFL support women spitting in the face of men? If men and women are equal, why was it wrong for Ray Rice to fight back? 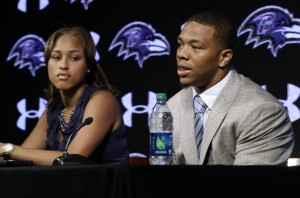 Has Ray Rice or his wife ever listened to Hip Hop music where the lyrics focus on the degradation of women calling them “ho’s, bitches, and sluts,” treating them as sex objects and glorifying male dominance?

Has Roger Goodell banned Hip Hop music from the locker room? Will he institute fines for any player found listening to Hip Hop or any other music that degrades women or promotes violence? Will Roger Goodell suspend any player who is found guilty of abandoning or not parenting his child? Will he bar from any football game any “artist” who sings about degrading women or engaging in violence?

Since the NFL is so concerned about violence towards children, will he suspend any player who has paid for, promoted, or in any way caused the abortion of a helpless, unborn child? Instead of wearing pink socks to support breast cancer research, will Goodell and the NFL have a “pro-life” month where the players are forced to wear red socks during games representing the blood of babies shed by abortion? I wonder how many abortions NFL players are responsible for? Isn’t that child abuse? Isn’t that degrading to women? Isn’t that the ultimate violence?

Perhaps Goodell should order a study regarding the consequences of being raised without a father. How many other Ray Rice’s are there in the NFL who have been raised without a loving father as a role model to come home to? What percentage of NFL players never lived in an intact, loving family? Perhaps the answers could help clean up the “family violence” now plaguing the NFL.

I wonder if Ray Rice and his girlfriend had been drinking Budweiser prior to the trip on the elevator. I wonder what percentage of domestic violence involves Bud Light. Will the NFL ban it at all football venues because it contributes to domestic violence and abuse? Unlikely. Beer commercials help fund the NFL.

No! Goodell’s answer is to serve up a cabal of feminists to “retrain” men how to act. It has never entered the mind of the committee of weenie-men that the men HAVE been re-trained by the social scientists in our society. Get the women out of the NFL!!! Feminism is destructive to men. The fruit is everywhere.

Here is the only evidence the NFL needs to talk about. But they won’t, so I will. Blacks make up about 12% of the population, yet 70% of NFL players are black. 70% of black children are raised in a home without a father. The American prison population is 35% black. Poor black kids are two times more likely to drop out of school than poor white kids.

The NFL needs to promote the family and traditional gender roles. Get the women out of the men’s locker room and men back into their children’s homes. Let’s teach men how to act like men and women how to act like women. I am willing to go on ESPN, CBS, or FOX and make the case. Do you think they’ll call me?

Racism is not destroying the black family; immorality is. We need don’t need another panel of shrinks to tell us what is wrong. Somebody needs to tell Roger Goodell and his office full of geldings that the answer is to repair the black family, and the NFL will be just fine.