Raleigh, NC, – Faith Driven Consumer™ – the group behind the IStandWithPhil.com movement which played a leading role in Phil Robertson’s return to Duck Dynasty, the #OpenZilla campaign for workplace tolerance at Mozilla, and the #FlipThisDecision campaign supporting the Benham Twins after their show’s cancellation by HGTV – continues to track the commercial viability of major Hollywood films courting faith audiences as part of its self-proclaimed 2014 “Year of the Bible Movie.” The organization’s Faith-Friendly Film Ratings use five specific criteria to measure the faith-compatibility of entertainment products aimed at the 46 million Americans who are Faith Driven Consumers and spend $1.75 trillion annually. 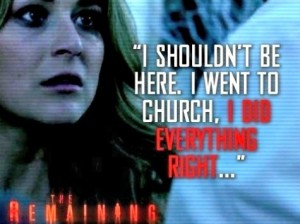 THE REMAINING, the edgy and engaging Sony Pictures/Affirm Films presentation depicting a group of young adults who find themselves among the ranks of those remaining on Earth after the biblical Rapture, rates a faith-friendly 4 out of 5 stars.

“Although faith-driven audiences have not been particularly known for their embrace of thriller/horror movies in the past, The Remaining is a strongly evangelistic film that keeps viewers on the edge of their seats from start to finish. The movie successfully paints a very graphic and captivating picture of what the world could be like without the restraining influence of the Holy Spirit and challenges moviegoers to personally examine their beliefs and consider the degree to which we are willing to sacrifice for our faith,” said Chris Stone, Certified Brand Strategist and Founder of Faith Driven Consumer. “Because this film respects and welcomes the values and biblical worldview of the 46 million consumers we represent-who spend $1.75 trillion annually-we believe The Remaining will be an entertainment option they can support with their hard-earned dollars.”

The Sony Pictures/Affirm Films release The Remaining rated 4, 4.5, 4, 3.5, and 4 in each of the above categories for a total rating of 4 out of a possible 5, making it a film that will likely resonate with faith-driven audiences. It is important to note that this film is for teenage viewers and up, it is not designed to be suitable for children.