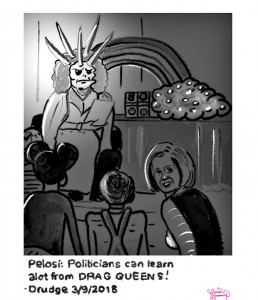 Elektra has been reading to kids with Drag Queen Story Hour for about a year. “The main key that we try to teach the children is acceptance,” she explained. “My job is to express to them, to help them understand, that it is OK to be different. It’s OK if you’re a boy, and you want to wear a tutu. It’s OK if you’re a girl and you want to wear a cap and fitted jeans, you know.”

All across America, from New York City to Fairbanks, Alaska, an horrific and immoral attack on the souls and spirits of our children is taking place in our libraries and public schools. It’s called the ‘Drag Queen Story Hour’, and it is every bit as disgusting as you might imagine. Only worse.

“And even as they did not like to retain God in their knowledge, God gave them over to a reprobate mind, to do those things which are not convenient;” Romans 1:28 (KJV)

The LGBTQ is on the warpath, and their goal is nothing short of the indoctrination and re-education of our children. When you cannot reproduce, you have to recruit. They tried adopting, but the complexity of adoption laws rendered it far too slow a process to change the thinking of a whole generation. But having forced indoctrination events like ‘Drag Queen Happy Hour’ go a long way to accomplishing your recruitment goals. Normalizing transgenders and transvestites is exactly what the LGBTQ is looking to do.

Adolf Hitler created the Hitler Youth in 1922, aimed mostly at pre-teen and early teen children. By the time he took office in 1933, those millions of Hitler Youths, having spent the previous decade being brainwashed, became the perfect footsoldiers in Hitler’s army. The Drag Queen Happy Hour reaches tens of thousands of children per year, so you do the math.

“Drag Queen Story Hour (DQSH) is just what it sounds like—drag queens reading stories to children in libraries, schools, and bookstores. DQSH captures the imagination and play of the gender fluidity of childhood and gives kids glamorous, positive, and unabashedly queer role models. In spaces like this, kids are able to see people who defy rigid gender restrictions and imagine a world where people can present as they wish, where dress up is real.” 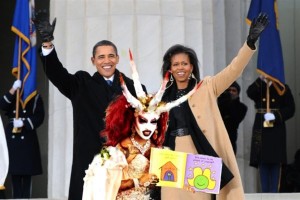 FROM NBC NEWS: When Angel Elektra entered a Manhattan branch of the New York Public Library last Thursday, the clamor of children faded. Dozens of little faces swiveled around to watch the 6-foot-tall drag queen clad in teal and black lace glide through the space. Everyone could see Elektra’s thrilled expression from across the room: After all, it was painted on her face.

As she sauntered toward her perch, she waved to the attentive crowd. She then took a seat on a chair made for someone perhaps half her height and began to read from “The Drag Queen Story Hour” coloring book.

“What is a drag queen?” Elektra asked, reading from page two. “A performer!” yelled a boy from the audience. “A dragon?” asked another. “No, not a dragon,” Elektra replied. “Between a dragon and a person,” another kid shouted. Elektra paused. “That works,” she deadpanned.

Elektra swept her heavy, plum-colored wig to the side and dabbed some sweat off of her brow. A mom in the audience stood up and began to fan the performer with a large children’s book.

After reading a few passages from the coloring book, Elektra moved on to “Julián Is a Mermaid,” a story about a boy from New York whose abuela (grandmother) helps him prepare a costume for the annual New York City Mermaid Parade in Coney Island. 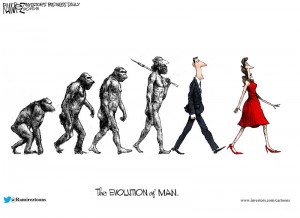 After story hour concluded, Elektra held a baby aloft and led the group of eager children around the library in a miniature version of the Mermaid Parade. The event was undoubtedly a memorable kickoff to the library’s summer reading program.

“It’s very, very convincing,” said Elliot, a wide-eyed young reader from Manhattan’s Upper West Side, of Elektra’s costume and accoutrement. He said he had seen a drag queen before in a movie, but up close, it was a whole different experience.