COSTA MESA, Calif. – 8TRACKstudios announced the launch of a national tour to promote its newest film, The Road to Edmond, with screenings across the country.

Starring Tripp Fuller and Nathanael Welch, The Road to Edmond is a provocative faith-based fea 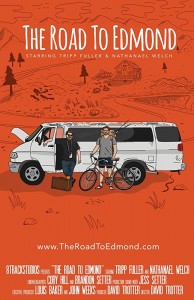 ture film that follows a youth pastor on a life-changing road trip after his church puts him on a two-week “Jesus timeout” for embracing a teenage girl who comes out to him as being gay. With a backpack full of gear, he sets out on his bike to clear his head and soothe his heart, but God seems to have other plans when the youth pastor has an unexpected encounter with a cynical traveler – accompanied by his dead father – on their way to Edmond, Oklahoma.

“People have come to expect faith-based films to have a preachy message and a certain style,” said David Trotter, director of The Road to Edmond. “This film is breaking the mold by telling a story where the characters question faith, sexuality, and Jesus.”

Filmed in Oklahoma and Colorado, The Road to Edmond is based on real-life stories emerging from evangelical churches across the nation as they hold a traditional viewpoint on heaven, hell, and homosexuality while their youth pastors are helping young people navigate questions about same-sex attraction and who ends up in heaven. The film is unrated and includes upper-body male nudity, cursing, and alcohol and drug usage.

“My Grandfather once said, ‘It takes a mature person to laugh at yourself,'” said Tripp Fuller, co-star of The Road to Edmond and founder of the Homebrewed Christianity podcast. “This film is an invitation to laugh at ourselves and remember the beauty underneath all the trappings of religion.”

Tripp Fuller, co-star, and David Trotter, director, will be on hand at each screening to introduce the movie and host a Q&A afterwards.