The SOUTH was RIGHT!

Called “A respite from Yankee history whose exclamation point in some typefaces is rather like a cannon being fired,” by The Tampa Tribune, The South Was Right! is a book in its second printing after only three months. Ronald and Donald Kennedy have gotten to the root of post-Civil War dissent. Much of Civil War history is untrue because like most history, it is written by the victor. The story we hear is that hundreds of thousands of Southern men went to war over an issue that only affected 6% of the population. Read this book and learn the truth: there was no shining Northern force fighting a moral battle for the sake of ending slavery; there was no oppressive Southern force fighting to preserve it, either; and after the South declared its independence, the Union ruthlessly invaded, leaving Southerners no choice but to defend themselves. 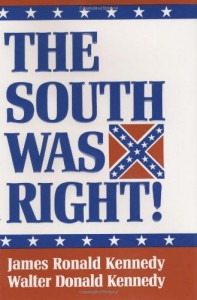 Unfortunately, the South lost the struggle and has suffered ever since. It has become an economic colony of the North, used and exploited like other colonies throughout the world. Politically, the North still controls the government and continues to impose its radical social agenda on the rest of the country at the expense of individual liberty. Meanwhile, the Supreme Court, the first federal department to infringe upon the rights of sovereign states, continues to suppress any efforts to reclaim liberty for the individual from the federal government.

Today, is a result of the war in which the South lost its right to be a free country, there is a continuing effort to obliterate all symbols dear to Southerners and make sure that the Southern states continue to have fewer rights under the constitution than other states. Furthermore, although home to one-third of the population, the South is represented by one out of nine justices of the Supreme Court, and that only after the greatest struggle.

Sure to be one of the most controversial books of the decade, The South Was Right! is an attempt to set the record straight. Nearly a century and a half after the war, the Confederacy still exists and an order of New Unreconstructed Southerners is calling for its reunification. Brothers James Ronald Kennedy and Walter Donald Kennedy represent the spirit of other patriots like Lech Walesa, Light Horse Harry Lee, Aleksandr Solzhenitsyn, and Mohandas Gandhi who inspired their people to regain their independence. This book, filled with documented evidence supporting all the Kennedys’ claims, issues forth a frighteningly realistic picture of a captured people, their struggle to preserve their heritage, and their right to exist as an independent country and as a distinct culture.