The Truth About GOP(e) Abandoning Trump 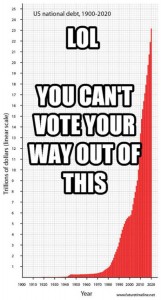 Let’s cut the crap eh? Paul Ryan, Mitch McConnell, Reince, John McCain and the others are not upset about Trump’s foul mouth. That’s yet another lie.

Here’s the truth: They know damn well that last year alone the House and Senate, both of which are Republican, presided over, passed and spent at a level that generated a $1.4 trillion deficit.

Let me remind you that all revenue bills must originate in the house.  The President may not spend one dollar that has not been allocated by Congress.

It is a fact that the government ran a $1.4 trillion dollar deficit in the fiscal year ending September 30th.  Read the link for the documentation; the MTS showing exactly where that went will be out Tuesday, and I will be reporting on it.

Here is the problem: If Trump wins the election then both Houses of Congress and the Presidency will be carried by Republican majorities.

This means they will have nobody to blame for what is a certain fiscal and economic crack-up that will come during the next President’s term on the path we are on now and which none of them intend to change.

If Hillary is in office they can blame her just like they blame Obama now, even though, as noted, the Constitution requires all revenue bills to originate in the House and the President cannot spend one dime without a Congressional appropriation.

However, the people of this nation are either too stupid, too ignorant or have their face stuffed too far up a social media site’s ass to pay attention to this fact and demand that it stop before the federal government blows up on a budgetary level, before our economy blows up and before all of our asset markets — stocks, bonds, housing, all of it — go up in smoke with losses that could easily reach 90%.

THAT is what is coming, it is likely coming during the next President’s term and the GOPe knows it.

If it happens when the GOP controls all three portions of the bill-passing mechanism in the United States they will own it and have it tattooed all over their bodies and will not be able to blame it on anyone else.

That is why the “outrage” now, when it is being widely reported that Paul Ryan along with others in the Republican Party knew that leaked audio recording from Trump existed months if not years ago.

The issue is not a leaked audio recording from 10 years ago.

It’s their mortal fear of being hung, either politically or literally, when the economy and federal government collapse on their watch and as a direct consequence of their actions with no way to blame anyone else.