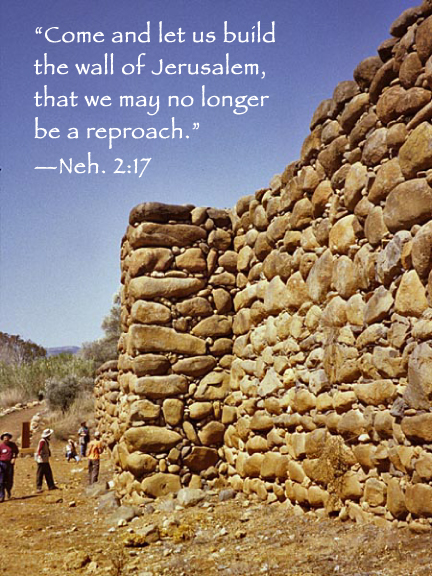 Nehemiah 1:1-2:20-words of Nehemiah son of Hachaliah. . . The remnant that are left of the captivity there in the province are in great affliction and reproach: the wall of Jerusalem also is broken down. . . Oh Lord God of heaven, the great and terrible God, that keepeth covenant and mercy…. I pray before thee now. . . I Said unto the king, if you please the king, let letters giving me to the governors beyond the river. . . And the king granted me, according to the good hand of my God upon me. . . There are up in the night by the brook, viewed the wall. . . And the rulers knew not whether I went. . . Then said I unto them, you see the distress that we are in… He said onto them, the God of heaven, he will prosper us: therefore, we his servants will arise and build: . . . In Jerusalem

I was listening this morning to a brother in the church who was speaking from the book of Nehemiah. He was speaking about the king’s cupbearer and being a servant. In the midst of all this he spoke about Nehemiah’s desire for the wall that was broken down around Israel to be repaired. As I listened the Lord began to show me the similarities between the nation of Israel at that time and America today.  It is amazing how some 2500 years later we are dealing with some of the same issues with which Nehemiah dealt. In verse three of chapter one Nehemiah speaks of how the people in the land had great affliction and reproach because the walls were broken down and the gates burnt. The walls represented the sovereignty of that nation and provided security and national protection against enemies invading their land and harming their people.

Similarly, in America many families have been going through great suffering and affliction because there are no walls to protect them.  At times we don’t always feel the stress or the pain of others because it has not touched us personally. I remember many years ago I was listening to a radio program and the speaker spoke of how during World War II almost every family had at least one member overseas involved in the conflict. This was something that became personal to all involved and there was a great sense of national pride and patriotism. Everyone pulled together doing whatever they could.

Recently, at the president’s announcement of a national emergency regarding building the wall, there was a reporter who raised the question if this was real or something he had made up. At that moment the president spoke and told the reporter to ask the Angel mothers that were there if it was made up. One life lost due to the fact that our borders are not secure is too many and there are countless families that have been impacted in this way.

It baffles the mind when you hear about our prisons being filled with illegal immigrants due to crimes of violence including rape and murder placing a burden on taxpayers to finance this. Our border patrol and I.C.E. agents are valiantly trying to contain this threat to our nation as much as possible, at great personal cost not being equipped with what they need to do the job. In spite of this tens of thousands every month make their way into our land.

Cartels are pouring drugs across our borders, along with women and children being sold into sex slavery.  But there is a segment of people who tell you that this is not an emergency. How could people be so blind to that which is going on?  Could it be that it is more than just the physical inability to see, but, a spiritual blindness to what has been going on in our country for years? We are told that Nehemiah fasted and prayed for the Lord’s direction and guidance. Perhaps it is time for America to once again call out to the God of creation, the Lord Jesus Christ and repent of her sins of Abortion, racism, opposition of the poor, and so much more.

In the Bible account, Nehemiah goes before the king and the king sees that Nehemiah is saddened, and asked him why? Nehemiah speaks to the king and tells him that the walls of Jerusalem are down and the land lays desolate. The king says to Nehemiah what do you require of me? This little sentence speaks so much of what has been missing in our country for so long. Many have complained of President Trump speaking of making America great again and of America being number one in all his dealings around the world. Yet, is it not the duty and responsibility of the King, or Prime Minister, or President to be concerned with the well-being and care of his own people? The question that needs to be asked is not if this is the president’s responsibility, but isn’t it also the responsibility of all those who hold office duly appointed by the people of this land? Isn’t it the duty of our elected officials to care for what is best for those who are American citizens and not for those who have broken the law and circumvented our system of immigration?

We read of Nehemiah going at night time to survey the walls of Jerusalem that have been broken down, and he begins to see the great task that lies before them. I find it fascinating that likewise, our president has been down to the southern border many times and has asked border control and their associates what they need to secure our borders. After an analysis of the border and of the situation that is there, they gave President Trump their recommendation to fix the problem. Instead of Congress taking the advice of the border control and coming up with the money to fix the problem, they play politics. My question is, how many more must die, before they act? How many more sex crimes must women and children endure, before the leadership does their job? How many more overdoses must we read about in the newspaper, or hear on the news before the leaders put the welfare of the nation above their own political agenda?

Nehemiah had his opposition also.  They did everything that they could to prevent the wall from being built. The name of the first one is very interesting, it is Sanballat the Horonite. Sanballat’s name means secret enemy and Horonite means angry men.  He is coupled with two others that assist to cause problems for Nehemiah. It is amazing in the biblical account that they even tried to get Nehemiah to come and meet with them, so that they could do away with him. It is my opinion that those who are opposed to the wall are doing so because they have an agenda, that is not for the benefit of the United States or her people. I do believe that their agendas are against the sovereignty of the United States. Sanballat and his colleagues did not want the wall to go up because they were taking advantage of the people of the land. If the walls went up, they could no longer manipulate and keep these people in bondage. The fear mongering and constant inability to defend their nation made them vulnerable to their enemies. 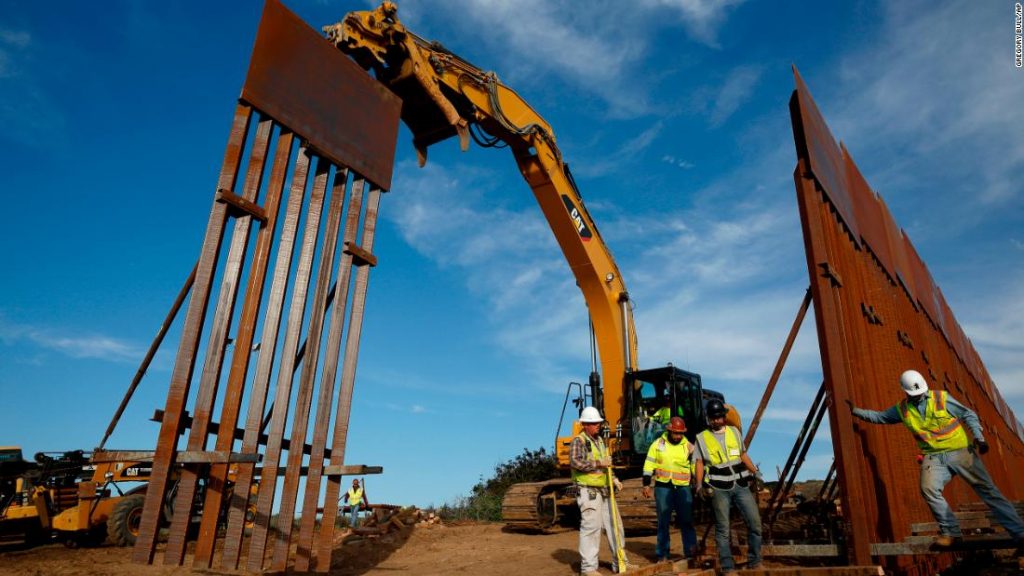 Building the Wall at our southern border

You might say that we are not vulnerable, but aren’t we? We have diseases that are now in this country that we have not heard of for decades because they were nearly eliminated. Imagine, hundreds of thousands of people coming into our country that have never been checked for diseases, including children in our school systems who have never been required to have a record of immunizations.  Drugs, human trafficking, compromised national security, criminals coming in and the financial burden on taxpayers to support the influx of immigrant’s needs, while they await lengthy legal processing is putting a burden on us all.

We are a nation of immigrants, we have welcomed millions of all nationalities to come and be part of the American dream. Many of the immigrants are third, fourth, or fifth generation and their families have become prosperous and have grown to become part of the American dream. We welcome all immigrants to come and participate in this land that God has blessed and prospered, but they must do it as those who have come before them have done it. It is wicked for people to come into a sovereign nation and expect them to not require of them what was required of those in the past, to come in by legal means of our immigration system. For any nation to be secure is imperative that she have her borders clearly marked and secured from all enemies, whether foreign military powers or refugees looking for something better.

In closing, Nehemiah was a man that was on a mission commissioned by God. There has been much talk about the presidency of Donald Trump, whether it is of God or not. Many predicted his victory long ago before the presidency, or even the announcement of running for the presidency of the United States. One was a very prominent prophet who in the last year went home to be with the Lord, whom many stated had an outrageous credibility with regard to what the Lord spoke to him coming to pass. He stated that God had raised up Donald Trump to be president and that he would secure the United States.  That God had raised him up with a mission as a bulldozer to remove that which offends God, and to make America prosperous again. 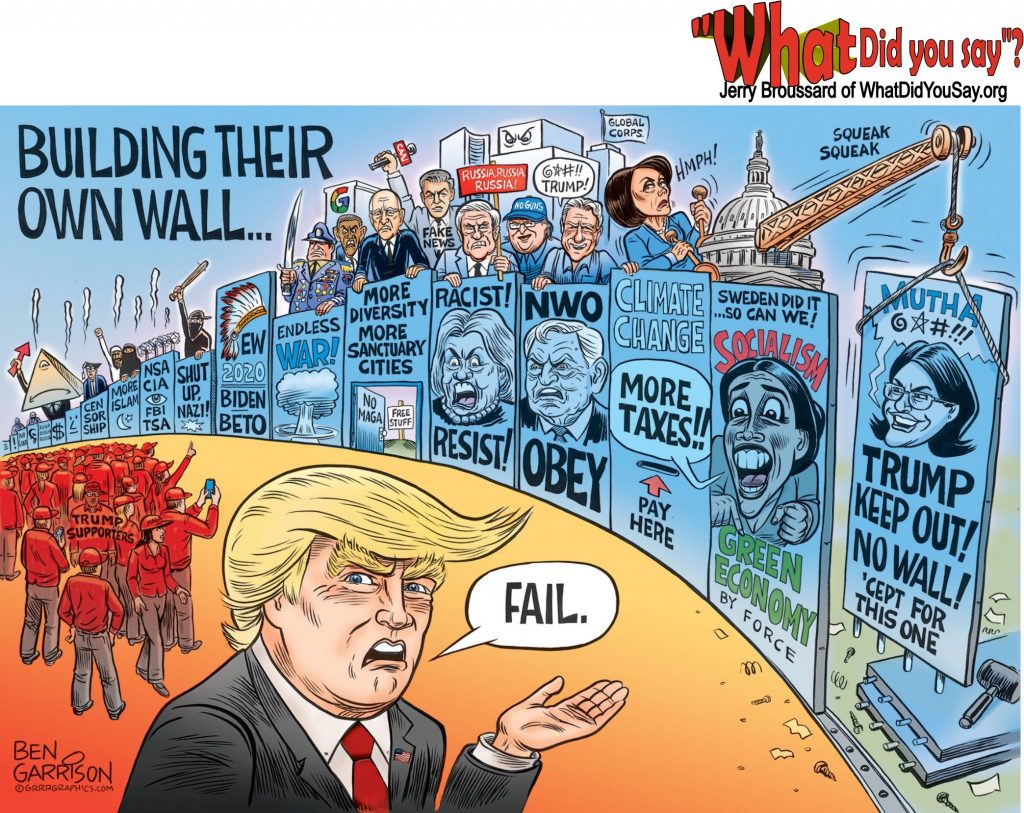 gospel. A Pharisee, named Gamaliel rose up and spoke to the Council telling them that they were the ones in the past that had roused up the people and then faded away. He went on and said if this thing be of man it will fade away, but if God, take heed what you do otherwise you could find yourself fighting against God.

I am assured and confident that the wall will go up, and that it was God who installed Donald J Trump as the 45th president of the United States. We need to take heed that we do not fight against the will of God.