The War Party Marches On 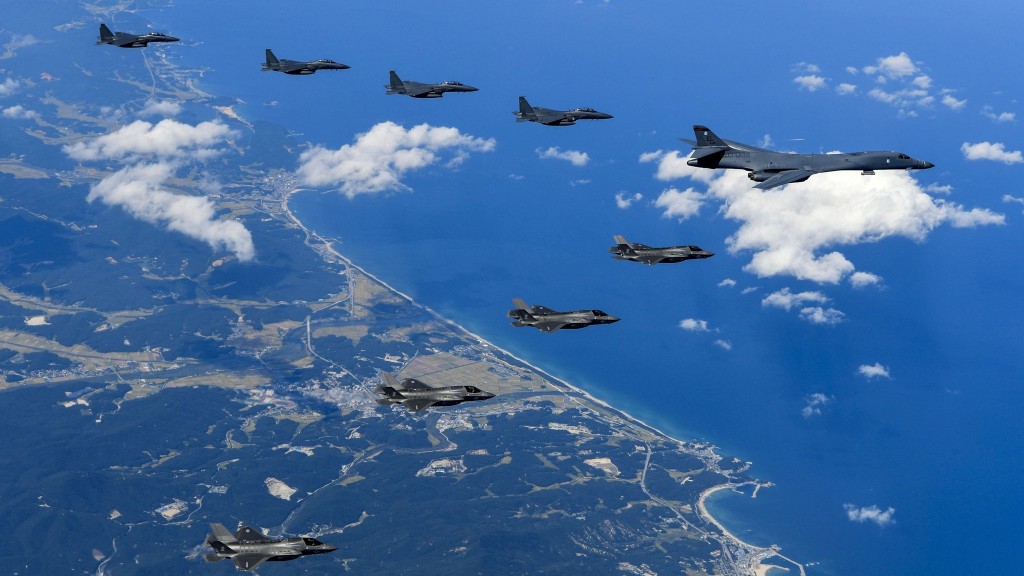 This US Army handout photo obtained September 23, 2017 shows Air Force and Marine Corps aircraft conducting a mission with the South Korean air force over the Korean Peninsula, on September 18, 2017. US bombers accompanied by fighter jets flew off the east coast of North Korea on September 23, 2017 in a show of force designed to project American military power in the face of Pyongyang’s weapons programs, the Pentagon said. It was the furthest north of the Demilitarized Zone (DMZ) any US fighter or bomber aircraft have flown off North Korea’s coast in this century, Pentagon spokesman Dana White said. / AFP PHOTO / US ARMY / Steven SCHNEIDER / RESTRICTED TO EDITORIAL USE – MANDATORY CREDIT “AFP PHOTO / US ARMY/STEVEN SCHNEIDER/HANDOUT” – NO MARKETING NO ADVERTISING CAMPAIGNS – DISTRIBUTED AS A SERVICE TO CLIENTS STEVEN SCHNEIDER/AFP/Getty Images

When will the American people catch on to the fact that we do not have two political parties in Washington, D.C.? As I have said repeatedly—and as experience continues to verify—there is just ONE party in Washington: the War Party.

No matter which party controls the White House or Congress, the War Party runs things. Warmongering neocons in the GOP and warmongering neolibs in the Democrat Party control Washington, D.C. Oh, they might fuss and feud with each other over domestic and social issues (abortion, homosexuality, welfare, immigration, tort reform, etc.), but they are joined at the hip on the one issue that matters most to them: the Warfare State. Yes, these domestic issues are very important—except to the War Party. Members of the War Party can be pro-life or “pro-choice”; pro-gun control or pro-Second Amendment; pro-homosexual “marriage” or pro-traditional marriage; pro-illegal immigration or pro-legal immigration; pro-welfare expansion or anti-welfare expansion; pro-laws protecting defendants or pro-laws empowering prosecutors; but everyone in the War Party is united in their support of perpetual war.

In a recent column I reminded people:

Now, stop and think, folks. The U.S. has dropped 200,000 bombs (the number is probably greater than that by now) on seven Middle Eastern countries—each country comparable in size to the states of Alaska, Texas, California, and Washington State. Try and imagine seven states in the U.S. having 200,000 bombs dropped on them. Think of the death and destruction that we Americans are supporting with our tax dollars. How many innocent people are killed with each bomb and missile? Conservative estimates calculate that hundreds of thousands of innocent people have been killed (and how many more wounded and maimed?) in America’s phony “war on terror.”

Furthermore, ISIS is all but expunged. But it wasn’t U.S. bombs, missiles, or troops that destroyed ISIS. The truth is, the U.S., Great Britain, Israel, and Saudi Arabia CREATED ISIS and gave them cover and support for as long as they could. The same is true for al-Qaeda and the Taliban. No, the U.S. didn’t destroy ISIS; Russia did. These terrorist organizations are nothing but contrivances of the War Party in Washington, D.C., to give the American people a boogeyman to fight so the War Party can keep feeding the military/industrial/surveillance/Police State complex—and themselves, of course. Oh, and don’t forget about the petrodollar/Sunni Muslim connection either.

The U.S./Israel/Saudi Arabia alliance fully intended to have destroyed the Assad regime in Syria and to have brought that recalcitrant nation into the globalist/New World Order/Federal Reserve financial kingdom by now. But, alas, Vladimir Putin spoiled that plan by sending the Russian military to destroy the U.S./Israel/Saudi Arabia-backed ISIS terrorists and save Assad’s Syria. Of course, Syria is the stepping stone to Iran—another Shia Muslim country that refuses to surrender to the central bankers at the Federal Reserve.

The War Party that controlled G.H.W. Bush, Bill Clinton, G.W. Bush, and Barack Obama—and that now controls Donald Trump—has decided to use Afghanistan to keep the boogeyman alive in the Middle East. Trump just sent an additional 4,000 troops (that we know about) to that beleaguered country. That brings the total number of U.S. troops in Afghanistan to over 15,000 (again, that we know about). And, of course, Trump continues to demonize Iran, so the War Party and its Zionist allies will always make sure that there is a boogeyman in the Middle East that we should worry about.

But with ISIS almost extinct, the War Party must manufacture more boogeymen to fight. Enter Africa. 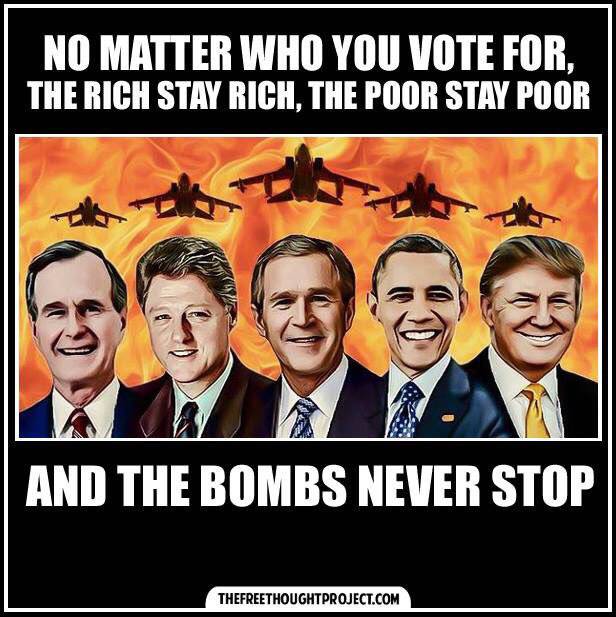 “While there is no direct combat mission for US troops in Niger, debate in Congress is heating up over whether to update or replace the 9/11-era authorization for use of military force, as the presence of US troops across West Africa gains widespread media coverage.”

“The US has more than 6,000 troops stationed in about 53 of the 54 African countries. Most of them, approximately 4,000, are located at Camp Lemonnier in the east African country of Djibouti.”

“[Senator Lindsey] Graham supports sticking with the original Authorization for Use of Military Force, which passed three days after the September 11, 2001 terrorist attacks and sent troops to Afghanistan and then Iraq.

“A close ally of Graham’s, Senator John McCain (R-Arizona), is calling for more debate on the issue and has supported the idea of a new authorization. Last week, McCain, who chairs the Armed Services Committee, threatened to subpoena the White House for information regarding the attacks in Niger, claiming he had been told ‘very little.’

“Senator Rand Paul (R-Kentucky), who sits on the Foreign Relations Committee, has clashed with both Graham and McCain over war policy. He attacked Graham on Twitter on Monday as a ‘warmonger’ who should have known about US troops in Niger.”

Paul tweeted, “You know you are in too many wars in too many places when even warmonger Lindsay Graham can’t keep track anymore.”

“On Friday, Defense Secretary Jim Mattis had meetings with both McCain and Graham and told them about the situation in the region. After the meeting, Graham told reporters that Mattis said the war on terrorism is ‘morphing.’

“Speaking to reporters Monday, General Dunford echoed Graham’s statement, describing US troops stationed around the world as a ‘part of a global strategy.’”

Secretary of Defense Mattis says the war on terrorism is “morphing.” First it was the Taliban and al-Qaeda, then it was ISIS, now it is “morphing” into another boogeyman—in Africa it looks like.

And even as I write this column, news broke that “[t]he Trump administration is paving the way for lethal strikes against terrorists in Niger as the U.S. military pushes forward with a plan to arm the Reaper drones that fly over that country, multiple U.S. officials told NBC News.”

Yep! It looks like the War Party’s war in Africa has already begun.

By the end of the year, Congress will have to vote to approve—and the President will have to sign—another warmongering authorization bill in order to keep expanding the Iraq and Afghanistan crusades around the globe. You can bet your bottom dollar that the warmonger Donald Trump will strongly support the bill and the Republican Congress (joined by most Democrats) will pass the bill and, of course, Trump will sign it. Count on it. Senator Rand Paul and a few others will oppose the bill, but the War Party will NOT be denied. Just watch.

Did you notice Senator Lindsey Graham’s words? He said, “You’re going to see more aggression by the United States.” In other words, these military actions are NOT defensive in nature; they are offensive. He also said, “You’re going to have decisions being made not in the White House but out in the field.” That means there will be no government oversight of what field commanders decide to do. Please remember that we are not formally at war with ANYBODY. Graham is so full of bluster about America’s warmongering that he doesn’t even try to couch his war rhetoric with any kind of moral or constitutional justification.

Did you catch General Dunford’s words? He said that sending U.S. troops around the world is “part of a global strategy.” Indeed. That’s because the War Party in Washington, D.C., does the bidding of the globalists.

And, again, Secretary of Defense Mattis said the war on terrorism is “morphing.” Morphing is a nice word for expanding.

It doesn’t matter to a tinker’s dam what the American people get stirred up about; as long as the War Party is allowed to keep fomenting war around the world, the globalists are happy.

Then, of course, North Korea is sitting out there as a potential trigger for the granddaddy prize of them all: nuclear war. Dr. Paul Craig Roberts reports that the Russian and Chinese governments are convinced that the War Party in Washington, D.C., is planning a nuclear attack against them. (See Dr. Robert’s report Washington Plans To Nuke Russia And China)

Of course, I’m sure that most readers are aware that Donald Trump has instructed the Air Force to put nuclear-armed bombers back on 24-hour ready alert. This hasn’t been done since 1991. So, Dr. Roberts might be right.

It is more than interesting that Russia and China are in the process of trying to divorce themselves from the Rothschild central bank and return to a gold-backed economic system (does America even have any gold left in Fort Knox?). So, the war rhetoric against those two countries coming out of the White House and Pentagon just happens to coincide with Russia’s and China’s intention to kick out the Rothschild bank, right? But I again digress.

From the day that Donald Trump entered the presidential race, my biggest concern has been that the globalists would use him to take America into nuclear war. This concern has grown exponentially since Trump has assumed office.

The problem is: hardly anyone even bothers to notice. The American people on the left and right are so enamored by all of the distractions that the War Party creates for them that no one is looking at the real end game: perpetual war and even nuclear war.

Christians and conservatives are all worked up over Antifa and Muslim terror networks in America’s heartland (which are virtually all FBI false flag sting operations); and liberals and secularists are all worked up over Christians trying to put them under a theocracy (which is a nonexistent absurdity) and some college professor or student saying something positive about Robert E. Lee; and neither side sees that what the globalists are really doing is using perpetual war to both enrich themselves and destroy our liberties.

Will the American people ever catch on—I mean before a nuclear bomb falls on them?

Nations that recklessly ignore God’s immutable laws regarding Just War are destined to incur the judgment of God. America will NOT be the exception to this rule.

Sadder still is the way that a majority of America’s pastors and preachers seem to have no cognizance of God’s Natural and Scriptural laws regarding Just War and, therefore, are often the country’s biggest cheerleaders for unjust wars.