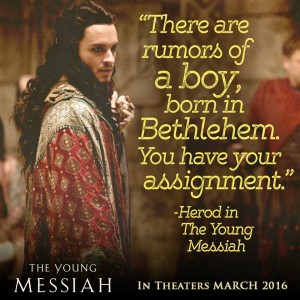 Cyrus Nowrasteh burst into the film landscape with a tense look at the practice of stoning in the fictionalized The Stoning of Soraya M. Seven years later, he returned to directing with an adaptation of Anne Rice’s Christ the Lord: Out of Egypt that examined Jesus’ return trip to Israel after the flight from King Herod’s edict. Now, as The Young Messiah arrives on home media this week, Nowrasteh sat down with Christian Cinema to talk about the power of his latest film.

Nowrasteh admitted that he was aware of Rice’s book but that when she wrote a strong review of The Stoning of Soraya M. a connection was formed. “I spoke to her agent and mentioned that my wife and co-screenwriter, Betsy, had read the book and loved it,” he said. “So we read it to consider it for film adaptation, but we had no idea how we would set up the movie.”

Thanks to film and friend connections, Nowrasteh made contact with pastors, priests, theologians and other friends about the time and tradition surrounding Jesus’ ‘tween’ years. “Dr. Ted Baehr of MovieGuide was one of the first people we spoke to,” Nowrasteh shared. “It’s a heavy responsibility when you’re dealing with the unknown periods of Jesus’ life. One has to do it with reverence and respect, and with as much knowledge as there is available.”

The response to the film has been phenomenal, as Christian leaders, Christian audiences, and even non-faith audiences shared their profound responses to the film. “One pastor got up at a screening and said this was the best Jesus portrayal ever on screen because it portrayed him as a human and compassionate person,” the director remembered. “We were thrilled to have made a movie that shared a ‘connectable’ Jesus for audiences and especially children.”

Nowrasteh’s own faith has been impacted as he worked out the details of what Jesus’ early, post-Nativity life might have looked like. “The journey of making this film had a profound impact on my faith in so many ways,” he mused. “For me this is what the experience of making this film has really been about my own faith journey.”

To share that with others has been a blessing to Nowrasteh, as he now hopes that the home media version will move more people to talk and ask questions. “We hope that they will explore their Bibles because of seeing the film,” he said. “I don’t know any Christians who haven’t pondered Jesus’ childhood!”

On the home media version, available on Blu-ray and DVD, Nowrasteh has included a behind-the-scenes featurette and deleted scenes. But the director admitted that he devours special features for the films he buys, and takes special pride in the detailed commentary that he and his wife provide.

Now the only question remains, will we get a teenage Jesus from Nowrasteh anytime soon? The director said that the topic is being discussed – so we’ll have to wait and see!

The Young Messiah is available now on Blu-ray and DVD.