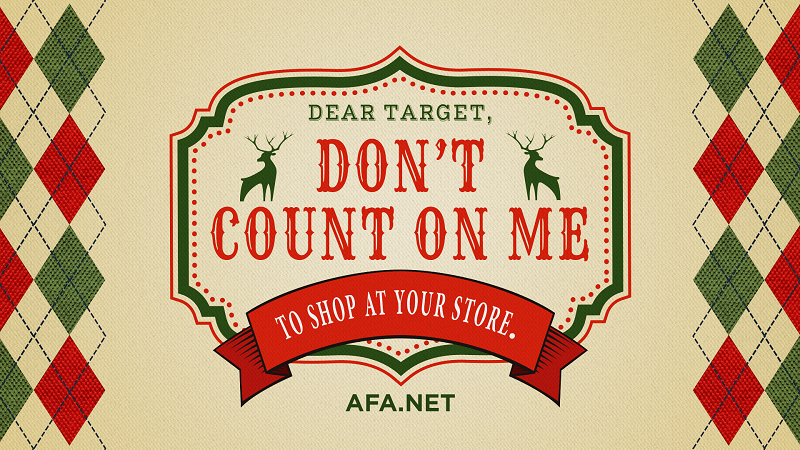 We realize that a great many American shoppers will begin shopping for Christmas soon and especially immediately after Thanksgiving. Target is hoping that you won’t care that they allow men into women’s bathrooms and changing rooms and will do your Christmas shopping with them. AFA knows that you do care.

Sexual Predators Despite Target’s denial that men entering women’s rooms is a problem, the reality remains that it is a major problem. We have the proof.

Just last month, a man pleaded guilty for video-taping a woman inside a Target store changing room in July. Unfortunately, this is not an isolated case. AFA has documented at least ten other recent cases in which women have been exploited by sexual predators inside Target stores.

In addition, Target’s grocery sales have slumped to the point that experts are calling on the company to scrap the food division company-wide. In fact, grocery sales have been so bad, Target has dismissed its senior vice-president over the grocery department.

The reason the grocery side of Target is falling is because there is a decreased amount of foot traffic. With lower foot traffic, the food freshness date expires before being purchased.

Stay the course with us Any company as large as Target can withstand a short-term loss of sales. That’s where Christmas shoppers come in. Target is banking on this Christmas season to turn around this trend for 2016.

Let’s hold firm to our conviction that men have no place in women’s restrooms and dressing rooms and continue our pledge to boycott Target stores, especially through the Christmas shopping season.

With Target hoping you’ll do your Christmas shopping with them, send them the strongest possible message you can and let Target know, “Don’t Count On Me!”