Tonsils, Tonsillectomies, and the Immune System

By Kali Sinclair
(NaturalNews) The tonsils are part of our immune system, the visible part of our lymphatic system. They provide the first line of defense for pathogens swallowed or inhaled. Specialized cells in the surface of the tonsils capture pathogens allowing B cells and T cells to attack.

Tonsil tissue is similar to other lymphatic tissue, what we call lymph nodes found under the arms and near the groin. The purpose of tonsils is clear and immediate – they are a vigorous element of our immunological defense. So why do we perform 200,000 to 250,000 tonsillectomies a year in The United States? 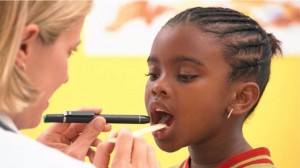 Your child has frequent bouts of strep throat? Yank those tonsils! Your child’s tonsils are big? Put that kid under general anesthesia, and cut them out! Once again conventional medicine treats a symptom not a cause. If your child’s tonsils are enlarged or your child presents with frequent strep infections, the question is not whether or not to rip out the tonsils, the question is what is causing the infection?

Back in the days when my family and I still embraced conventional medicine, I believe the first time I questioned a doctor’s recommendation when he wanted to remove my eldest son’s overly large tonsils. Rather than comply, I put my son on an allergy elimination diet and discovered that he reacted to dairy products. Removing dairy from his diet solved the tonsil problem along with his frequent bronchitis and ear infections.

Years later I faced off with another doctor who insisted on a tonsillectomy for my youngest son after his third case of strep throat that year. I called a friend, my former pediatrician who lived in another state, hoping for her support. She suggested a strep test for my other child, saying he was probably carrying colonized strep with no symptoms and repeatedly re-infecting his brother. She was right. After treatment there was no more strep and no need to remove a vital part of my son’s immune system.

Rachel faced the same decision. Her research told her that her son’s most likely outcome after a tonsillectomy was one fewer sore throat or throat infection a year. She didn’t think such a small improvement warranted the risk of surgery. She took her son to a naturopath. Vitamin D (which is essential for proper immune system function) and vitamin C resolved the problem.

In the 1950s when the United States was still dealing with epidemic outbreaks of polio, researchers discovered that children who had had their tonsils removed were three times more likely to contract bulbar polio (infecting the bulbar portion of the brain stem), than children who retained their tonsils.

Aside from our medical approach that bases solutions on symptoms rather than causation, ignorance of another kind has driven the lucrative practice of removing tonsils – doctors didn’t really understand their function.

In 2012, researchers discovered the tonsil “…is a ‘factory’ for immune cells” – specifically, for T-cells. T-cells are vital for fighting viruses and cancers caused by viruses (like lymphoma or sarcoma) and T-cells play a role in auto-immune diseases.

Excellent nutrition feeds the immune system and will help you and your children avoid the pain of tonsils overwhelmed with infection. A strong immune system is impossible with an excess of Candida. The strength of our immune system starts in the gut. If you’re looking for natural remedies for sore throats visit www.organiclifestylemagazine.com.