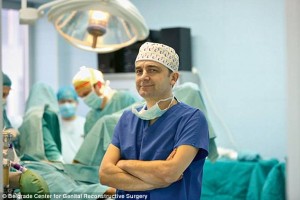 Dr. Miroslav Djordjevic, a world-leading genital reconstructive surgeon, says he and other colleagues are seeing increasing numbers of those who have undergone sex-change surgery wanting to transition back.

“Those wishing the reversal, Djordjevic says, have spoken to him about crippling levels of depression following their transition and in some cases even contemplated suicide,” the British National Post reported. The 52-year-old Serbian said, “It can be a real disaster to hear these stories,” but he added their stories are not being heard.

Djordjevic told the National Post he requires patients seeking transition surgery to undergo a psychiatric evaluation for a minimum of one to two years and have two professional letters of recommendation. While his practice has this safeguard in place, the doctor is concerned that the psychiatric evaluation and counseling that people receive elsewhere before undergoing gender reassignment is far from adequate.

After speaking with Djordjevic in 2014, James Caspian — a psychotherapist who specializes in working with transgender people –sought a research grant from Bath Spa University in southwest England to look into the de-transitioning issue. However, after initially being approved, the university later turned him down because the subject was deemed “potentially politically incorrect,” The Guardian reported.

“When he went back with his preliminary findings that suggested growing numbers of young people, particularly women, were regretting gender reassignment, Bath Spa said his proposal would have to be resubmitted to the ethics committee, which rejected it,” the paper added.

“A university exists to encourage discussion, research, dissent even, challenging ideas that are out of date or not particularly useful,” the psychotherapist said.

Dr. Michelle Cretella, executive director of the American College of Pediatricians, finds the same level of political correctness overriding a rational approach to the issue of gender transition in the United States. In a 2017 piece for The Daily Signal, Cretella wrote, “professionals who dare to question the unscientific party line of supporting gender transition therapy will find themselves maligned and out of a job.”

“I have witnessed an upending of the medical consensus on the nature of gender identity,” she explained. “What doctors once treated as a mental illness, the medical community now largely affirms and even promotes as normal.”

The doctor noted that the new transition affirming protocol instructs parents to treat their children according to the gender they desire. If diagnosed as gender dysphoric, then place them on puberty blockers starting at age 11 or 12.

If by 16 the children still insist they are trapped in the wrong body, they are to be prescribed cross-sex hormones and biological girls may obtain a double mastectomy.

Currently, genital reassignment is not recommended before age 18, but some professionals have argued the age should be lowered, according to Cretella.

The pediatrician believes this protocol does not serve children well, arguing gender identity, especially in youth, is malleable. Further, there has not been extensive study to learn the long-term health risks of putting young people on hormones contrary to the biological gender.

Cretella further highlighted that transition surgery has not solved one of the main problems it is supposed to address, the high rate of suicide among those who identify as transgender. A study in Sweden, which is among the most accepting of the LGBT community, found the suicide rate 20 times higher than the general population.

Cretella concluded, “Today’s institutions that promote transition affirmation are pushing children to impersonate the opposite sex, sending many of them down the path of puberty blockers, sterilization, the removal of healthy body parts, and untold psychological damage. These harms constitute nothing less than institutionalized child abuse.”

Ryan T. Anderson, Ph.D., in his book “When Harry Became Sally: Responding to the Transgender Moment,” released earlier this year, found a common theme among those seeking to transition back to their birth gender.

“They regret that medical professionals never explored the underlying psychological issues,” he writes. “They de-transitioned because they didn’t find the peace and wholeness they desired by changing their bodies but did find it when they were able to address past trauma in their lives and come to a better understanding of gender.”

Many also lament the damage done to their bodies by the hormones, including lost fertility. In many instances, they believe they were too young to be making such life-altering decisions. One woman identified in the book as Cari related that she transitioned at 17 to being a man, but de-transitioned back at 22 to her biological gender.

“I de-transitioned because I knew that I could not continue running from myself, dissociating from myself, because acknowledging my reality as a woman is vital to my mental health,” she said.