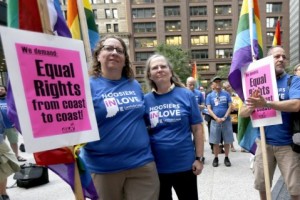 (WNS)–A three-judge panel of the 7th U.S. Circuit Court of Appeals unanimously struck down traditional marriage provisions in Wisconsin and Indiana today. A constitutional amendment approved in 2006 by voters limited marriage in Wisconsin to heterosexual couples, while state law did the same in Indiana. Neither state recognized same-sex marriages performed in other states.

During oral arguments in August, Ronald Reagan appointee Judge Richard Posner said bans on same-sex marriage amounted to “hate” and “savage discrimination.” Posner continued his extreme language in the court’s opinion on the case, stating, “homosexuals are among the most stigmatized, misunderstood, and discriminated-against minorities in the history of the world.”

The 7th Circuit is the third federal appeals court to reverse state laws on marriage.

The first federal appeals court ruling on same-sex marriage came in June, when a panel of judges from 10th Circuit ruled 2-1 against Utah’s constitutional amendment defining marriage between a man and a woman. The same court issued a similar ruling against an Oklahoma constitutional amendment. The 4th Circuit followed suit last month when it overturned bans on same-sex marriage in Virginia.

Decisions in other circuits were put on hold pending review by the Supreme Court, but the 7th Circuit declined to issue a stay of its decision. That makes the immediate future of same-sex marriage in Indiana and Wisconsin unclear. “We’re in a little bit of a holding pattern for a couple weeks,” said Scott McDonnell, the Dane County Clerk in Madison, Wisc., who had married gay couples after that state’s law was initially struck down by a federal judge.