Transatlantic Global Governance: A Regime Change or Coup by Any Other Name

After six decades the Republican Party is ready to grant fast track “trade promotion authority” that will allow for the emergence of the Transpacific Partnership and a transatlantic global governance agreement. Although these secret treaties are called “free trade” agreements, they are actually a Trojan Horse designed to do an end run around the Constitution and bring in global governance.

The individual and sovereign nations of Europe were destroyed by a series of “harmless” trade treaties that created the European Union. When the citizens of the European nations finally woke up it was too late because they had legally handed over their freedoms. The exact same stealth strategy of secret trade treaties is being used by American politicians on the left and the “right” to force America to come under the rule of global governance, which was formerly called global government. The reason that the trade treaties are secret is because there are powerful people who do not want you to know that they are designed to destroy our prosperity, our freedom, and our sovereignty.

The other reason that the contents of the trade treaties are secret is because they reveal the plan to transfer manufacturing, jobs, and the wealth of the middle class to global entities and Third World nations. They give our politicians secret powers to give away our Constitutional rights such as Freedom of Speech, Freedom of Religion, the right to privacy, and the right to bear arms. That means that trade treaties are a Trojan Horse that will allow the illegal rulership of the United States by multinational corporations, international banking cartels, and foreign governments who are not bound by the Constitutional protections that we take for granted.

The reason that the majority of the Republican Party and Democratic Party are still aggressively pushing these trade treaties, despite the protests of the American people, is because the leadership and the majority of politicians in both parties are “bought and sold” men and women; they do not represent the American people at all; they represent the people who put them in power and keep them in power: the multi-national corporations and the international banks. In the Republican Party, you have much talk about conservatism, saving American jobs, protecting the wealth of the middle class, and strengthening America, all of which is a complete sham because the majority of the Republicans are voting against all of these things by voting in favor of secret trade treaties. In order to sucker punch the American people they will talk about protecting traditional marriage and a few other symbolic gestures to perpetuate the illusion that they have conservative values. On the Democratic side you have all the major Democratic leaders who claim to be protecting the jobs of American workers and especially union jobs, but the reality is that they are controlled by the same international banks and multinational corporations as the Republicans.

For example, Senator Ted Cruz (R-Texas) masquerades as a conservative, but voted for the TPA. Cruz justified his vote by saying: 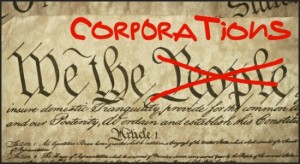 Senator Cruz’s remarks are essentially a lie. The purpose of enabling any president with “fast track authority” is to go around the Constitution and use secret trade treaties as a mechanism by which any topic can be inserted into a trade treaty whether or not it has to do with trade or not. If the TPA is finally passed in one form or another, then the United Nations Arms Trade Treaty could be passed without a senatorial vote. This would allow the Second Amendment, which grants U.S. citizens the right to bear arms, to overturned by the United Nations. Senator Cruz, who claims to be an expert on the Constitution, apparently knows this and he supports it.

The reason you hear almost nothing about any of this in terms of substantive details and real facts is because the same international bankers and multinational corporations who control both political parties also totally control the media, including the massive pseudo-conservative media-industrial complex. This complex consists of large numbers of “conservative” media personalities who pretend to be telling you the truth, but who are in reality actively engaged in covering up the truth by selectively ignoring the most important news stories or giving them only lip-service coverage or by causing people to focus their attention on the endless and mindless parade of pseudo-investigative news stories about shocking scandals, sex change operations, child molestation, murders, affairs, tabloid journal-crimes, etc.

All of this is designed to keep your eyes off the real ball. If the media personalities and media organizations are not seriously talking about the real meaning of the TPP and they are filling up their airtime with tabloid style-pseudo journalism, then they are in on the fix! If they are pontificating like blow-hards about the Constitution and the Bill of Rights, but they don’t really connect the dots, they have been muzzled. If they cover the morbid details about the church-shooting killer, Bruce Jenner, sexual molestation, and other clever sideshows, they are part of the problem.

What is the real ball? It is the united effort by Democrats and Republicans like Speaker Boehner to create a Trans-Pacific Partnership (TPP) which transfer the governing power of the United States from “We the people,” to globalists. It authorizes a new transnational governance structure, which could include nations like China. This would mean the Chinese government, rather than the American people, would have authority to govern America, at least to some degree.

What the trade treaties are really all about is a mechanism for a coup or regime change, where America ceases to be governed by “We the people,” but rather by some international body.