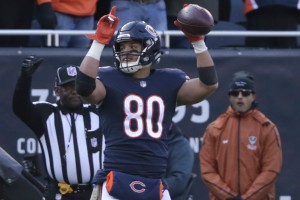 The Green Bay Packers get perennial love with Aaron Rodgers, and the Minnesota Vikings are one season removed from a trip to the NFC Championship Game, but it’s the Chicago Bears who own the NFC North.

Presented with a chance to claim their first division title in eight years on Sunday, the Bears didn’t back down despite a matchup with Rodgers and a desperate Green Bay team. Muzzling the Packers offense in a 24-17 decision, Chicago secured its fifth straight win at Soldier Field, its seventh victory in eight games and a guaranteed ticket to the playoffs.

There are countless reasons for the Bears’ turnaround: Quarterback Mitchell Trubisky’s step forward as a big-play threat, coach Matt Nagy’s utilization of the shifty Tarik Cohen, a Khalil Mack-headlined defense that has absolutely suffocated some of the NFL’s top talent throughout the year.

Tight end Trey Burton is another one.

A four-year veteran with the Philadelphia Eagles before 2018, the Super Bowl LII champion had a slow start to his Bears debut early in the year, totaling just 11 catches through the first four weeks of the season. Since then, however, few targets have had as much of an impact as the former Zach Ertz backup in the Windy City. Burton now leads the Bears in touchdown catches (six) alongside wideout Anthony Miller, and his latest score put Chicago up for good in Sunday’s divisional showdown with Green Bay. Burton’s 44 receptions and 506 yards as a Trubisky safety outlet entering Week 16 also rank among the Bears’ top-five pass-catchers.

“It’s been such a cool journey these last couple months on the field and off of it,” Burton told Sports Spectrum. “Getting to know my teammates and watching the city embrace this team. I’m so happy for this city, our fans, this organization. It been fun watching this team buy into Coach Nagy and his scheme, we are truly having fun out there.”

Originally undrafted out of Florida in 2014, Burton is also a devout Christian who’s proclaimed his faith throughout his NFL journey. Inspired to model Christ’s teachings, the fifth-year veteran announced this year that he would donate $1,000 for every catch he makes and $2,000 for every touchdown he scores to International Justice Mission, an organization that combats human trafficking and sex slavery. Earlier this month, he was named the team’s nominee for the Walter Payton Man of the Year.

The Bears tight end told Sports Spectrum on Monday morning that despite statistics and personal accomplishments, this year has revealed to him how important it is to be about others and sacrificing for the team.

“It’s not about me,” Burton said. “It’s about the team! Even though my role has increased this year from last year, I still have to keep the main thing the main thing and that is putting the team first. The NFL is such a statistical machine where all people care about is how many fantasy points you can give them. So it’s so easy to fall into the trap of ‘I need the ball thrown to me to have my stats/worth be shown,’ because that’s all people talk about. In reality football is the best team sport in the world and it’s never been about an individual, ever. So I catch myself at times putting my energy and thoughts into selfish things and that’s where God puts on my heart that it’s not about me. It’s a constant battle for me.”

Burton and the NFC North-champion Bears (10-4) will travel to San Francisco on Sunday to face the 49ers before closing their season in Minnesota for a rematch with the Vikings.